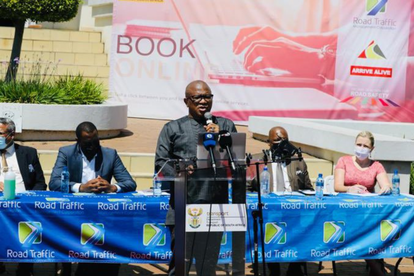 Transport Minister Fikile Mbalula addressed South Africa’s immense driver’s licence backlog on Thursday afternoon. Currently, the backlog stands at over 500 000 licences and has been a major source of backlash for Mbalula’s department.

Speaking during a media briefing in Midrand Mbalula claimed that the immense backlog will take an estimated four months to rectify. The Minister also confirmed that printing of licence cards resumed on 20 January.

This comes after the nation’s only card production machine had broken down in November last year. Repairs on the crucial machine required it to be sent to Germany, further adding to backlogs.

Nevertheless, Mbalula insists that the recovery plan is in full swing at the department of licensing and consumer affairs.

“Considering that the current backlog of 597,000 are waiting to be printed, we anticipate that it will take approximately four months to clear the backlog. The backlog of the cards currently in the same will be cleared by April 2022,”

Furthermore, Mbalula explained that priority would be given to individuals who have waited the longest for their cards.

The machine, which can manufacture around 400 000 cards a month, has produced over 128 000 licenses since it resumed operations last month.

However, it seems as if the situation will remain precarious for those whose licenses are set to expire soon. The Minister further explained that 2.1 million people are set to renew their licenses, which sets the stage for more delays.

“The total backlog of driving licences that will have expired by 31 March 2022, that have yet to be renewed, stands at 2.1 million nationwide.  Of this number, those that fall within the Covid-19 extension account for 70% at 1.5 million.”

With the situation being what it is, Mbalula encouraged motorists whose licenses are set to expire to come forward and renew them as soon as possible.