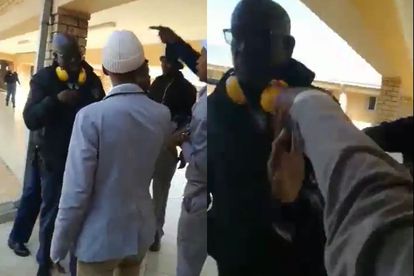 The police have commented on a viral video involving its members. Photo: Screenshot from video.

The police have commented on a viral video involving its members. Photo: Screenshot from video.

The police in the North West said they are aware of a video circulating on social media in which the Jouberton Station Commander is accused of stealing money that belongs to alleged members of the so-called Al Qaeda gang.

South African Police Service (SAPS) spokesperson Brigadier Sabata Mokgwabone said the station commander accused of theft in the video was not part of the team of officers that arrested suspects and confiscated their money and vehicle.

In the video, a heated argument takes place and police officers are confronted by a group of men who demand the return of their “R30 000.” There’s a lot of pushing and shoving and strong language in the two-minute clip.

The police spokesperson said members of the Flying Squad were sent to Extension 7 in Jouberton on Saturday afternoon, 23 July, after a complaint was received about a group of men who were extorting money from tuckshop owners.

“On their way to attend to the complaint, the members stopped when they spotted two suspicious vehicles; a Toyota Avanza and a BMW. Upon noticing the police, the occupants ran away, but two were immediately arrested while the third one was arrested later,” said Mokgwabone.

A plastic bag with money in it was found in the BMW. The suspects were taken to the police station and reportedly refused to bear witness or participate in the counting of the money in the bag, which amounted to R3900, according to officials.

The money was registered in the exhibit register and the suspects were arrested for extortion and possession of dangerous weapons.

The arrested suspects – Tshepo Gaborone, Paseka Sephanyane and Thabiso Motlhanke – appeared before the Klerksdorp Magistrate’s Court on Monday, 25 July. They were released on R500 bail each and are expected back in court on 30 August.

“The station commander was neither part of the team that effected the arrest nor counted the money. However, he granted permission for towing and safe keeping of the BMW.

“The complainants, are therefore urged to lodge a formal complaint for investigation,” said the police spokesperson.

The funeral of the late leader of the alleged Al Qaeda gang, Paul Ndamoyi, was held in Jouberton over the weekend. He was shot and killed in the street by unknown suspects on Friday, 15 July.