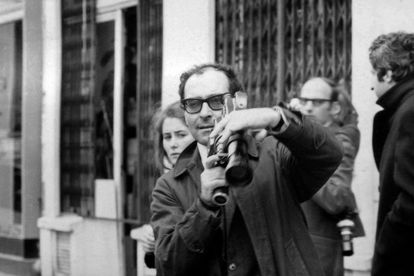 French director Jean-Luc Godard is seen filming during a demonstration in Paris on May 6, 1968. AFP PHOTO (Photo by AFP).

French director Jean-Luc Godard is seen filming during a demonstration in Paris on May 6, 1968. AFP PHOTO (Photo by AFP).

Jean-Luc Godard’s family confirmed that the iconic director died, on Tuesday, 13 September. The French-Swiss filmmaker was one of the most prominent members of the French New Wave movement, which took off in the late 1950s and revolutionised the cinema world.

The 91-year-old died “peacefully at home” in Rolle, Switzerland on Tuesday, said his family, according to AFP. There will be no official funeral ceremony as he will be cremated, they added. The French newspaper, Libération, broke the news earlier in the day.

Godard was born into a wealthy family on 3 December 1930. His family lived in Paris’ affluent Seventh Arrondissement, according to Reuters. His father was a doctor and his mother was the daughter of a Swiss man who founded a then-illustrious investment bank, Banque Paribas.

One of Godard’s best-loved pictures, Breathless (À Bout de Souffle), which presented itself as a crime noir on the surface but explored culture and broke filmmaking conventions, debuted in 1960 and popularised the jump cut.

Before he was a filmmaker himself, Godard worked as a critic for Cahiers du Cinéma, alongside other writers who would go on to become influential directors, including Francois Truffaut and Eric Rohmer, after they grew tired of conventional cinema and merely writing film criticism.

Godard is widely considered to be one of the most influential directors of the 20th century. Current directors influenced by his work include Martin Scorsese and Quentin Tarantino. In 1969, the late film critic Roger Ebert wrote of his importance in cinema:

“Godard is a director of the very first rank; no other director in the 1960s has had more influence on the development of the feature-length film. Like Joyce in fiction or Beckett in theater, he is a pioneer whose present work is not acceptable to present audiences. But his influence on other directors is gradually creating and educating an audience that will, perhaps in the next generation, be able to look back at his films and see that this is where their cinema began.”