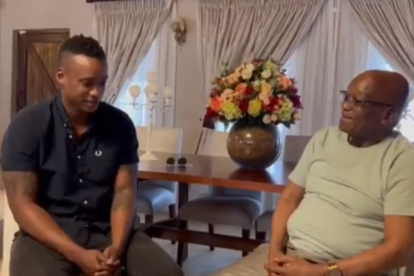 SA was given the chance to witness an intimate moment between Jacob Zuma and his son, Duduzane.Duduzane has been elected as Chairperson of the ANC’s ward 11 branch in Newlands East, Durban.

Interestingly, Duduzane doesn’t live nearby but claims to have family ties to the area. Furthermore, Duduzane has clearly declared his intention to follow in his father’s footsteps and lead the ANC.

In a video shared to his social media, Zuma and his son can be viewed discussing the personal victory. Certainly, Zuma is showering Duduzane with praise, congratulating his son for securing the post.

Zuma proudly affirmed Duduzane’s progress as his first step towards his goal of leading the nation.

The former president highlighted the importance of Duduzane making the most of the new role.

“It’s always important to make the branch make the difference within the organisation itself and secondly within the community where you are, to be able to serve the community and therefore give that kind of leadership.”

Nevertheless, Zuma made sure his son was aware of how proud Msholozi is of him.

“The politics (at branch level) are important, but also to take the interest of the branch members and the supporters in that area, and the community as such. It’s a challenge, but it is also an important achievement that you have made,”

Duduzane responded to the praise with satisfaction that his father believes he is on the right path. In conclusion, it seems as if the Zuma family is keen on turning politics into a family affair.