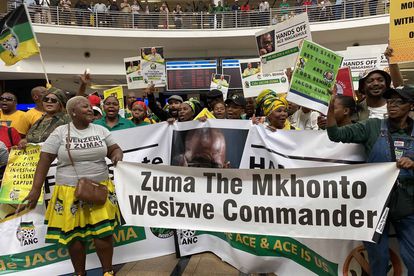 Addressing his supporters at OR Tambo, former president Jacob Zuma said he’s not scared of going to prison, and added that he attends court proceeding when needed. Furthermore, he said:

“Even during the the time when white people were in charge, I went. They imprisoned me for ten years and I came out. Even now, if this government of ours can arrest me and find me guilty, I will go to prison”.

Zuma wore dark sunglasses and explained that there was “something wrong with his eyes” and that he received treatment abroad, but didn’t go into detail.

He simply told Eyewitness News: “When there is too much light, they get affected”. This follows after he was issued with a warrant of arrest when he failed to appear in court and at the Zondo Commission earlier this month.

Speaking to SABC reporter Natasha Nokuthula Phiri, political commentator Kim Heller said Zuma “is not being given a fair trial”.

Most of what Heller said was drowned out by the throng of supporters in the background; however, the video clip can be viewed here.

Fun and games aside, Zuma has gone global for all the wrong reasons after a controversial single-page sick note submitted to the Pietermaritzburg High Court went viral.

Senior state prosecutor Advocate Billy Downer then proposed to issue an arrest warrant for Zuma. Downer noted that even though the document was produced by military doctors, it had been altered.

The news did not go down well with Zuma’s supporters, and many high-backers claimed that they would “go to jail” on the former president’s behalf.

On a lighter note, we can also count on the Twittersphere to lighten the mood. One netizen known only as Ounalypse, shared a picture of people wearing face masks and captioned it:

“What if Zuma went overseas to fetch coronavirus and you guys are waiting to receive it at the airport”.

You can write all stories about this honourable man try to vilify him but people will always gravitate towards him #ZumaReturns pic.twitter.com/lxOogH02Gc

Members of the Gauteng RET champions gather at the O.R Tambo International Airport to welcome former President Jacob Zuma back from Cuba.#sabcnews#ZumaReturns pic.twitter.com/PRaa1hoX4e

What a thunderous welcome fro Zuma. This is a Vote of Thanks From A Grateful Nation