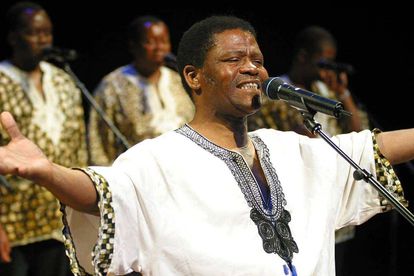 The president said that Shabalala’s memory should be honoured by ensuring that “our artists […] are not exploited, and that their rights to their works are protected for their benefit and the benefit of their descendants”.

[WATCH]: a special moment as #LadysmithBlackMambazo invite the President to join their performance as they pay tribute to founder Dr #JosephShabalala #RIPJosephShabalala pic.twitter.com/k5BvafY4sE

Back in 1986, Ladysmith Black Mambazo collaborated with Paul Simon on his Graceland album. The record went on to sell more than 16 million copies worldwide.

In addition, the Graceland album also won the Album Of The Year award at the Grammy Awards in 1987. Shabalala is hailed, and rightfully so, as a musical genius who brought traditional Zulu music to the world.

President Ramaphosa said on Saturday 22 February that Joseph Shabalala “made Paul Simon more famous than he was”.

Shabalala’s funeral was also attended by former president Jacob Zuma, as well as Minister of Sports, Arts and Culture Nathi Mthethwa, and Deputy Chief Justice Raymond Zondo, among many others.

Members of Ladysmith Black Mambazo also took to the stage and paid tribute to Shabalala by performing a medley of the group’s smash hits, including a segment of the award-winning song, Homeless.

Shabalala was forced into retirement in 2014 due to his deteriorating health. His last performance was at a memorial concert for the late Nelson Mandela.

Shabalala passed away on 11 February 2020 at the age of 78. The news of his passing was shared on Twitter by the official account of Ladysmith Black Mambazo:

“Our founder, our teacher and most importantly, our father left us today for eternal peace. We celebrate and honour your kind heart and your extraordinary life. Through your music and the millions who you came in contact with, you shall live forever”.