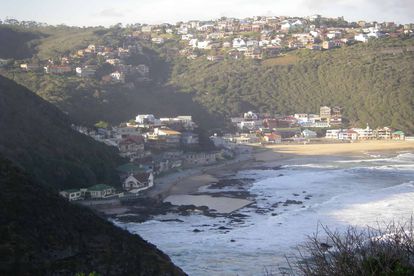 A view of Heroldsbaai, South Africa, from a lookout point south west of the town. Photo: JP Meijers/Wikimedia Commons

A view of Heroldsbaai, South Africa, from a lookout point south west of the town. Photo: JP Meijers/Wikimedia Commons

Less than a week after a young woman was rescued from the surf at Herolds Bay another beachgoer was swept out in a riptide and rescued by surfers.

Just as happened with the 21-year-old woman last week, the 59-year-old German man was plucked from the water by good Samaritans on surfboards.

On Friday Sea Rescue volunteers and emergency rescue services responded to calls from eyewitnesses who had spotted a man in distress in the surf.

When they arrived on the scene, they found that the German tourist had been pulled out of the water and was using a surfboard and bodyboard as flotation devices.

The NSRI responders launched rescue craft and ensured all involved were safely ashore.

“An NSRI rescue swimmer, who was the first NSRI crewman to arrive on the scene, and 2 George Municipal Lifesaving lifeguards, who live in Herolds Bay and reacted to the incident, found 2 good Samaritans, an unidentified surfer and an unidentified body boarder, had gone to the aid of a man who was caught in rip currents and swept out to sea.”

Surfers to the rescue

“The good Samaritans had managed to secure the 59 year old German man in the surfline, using the surfboard and body board as floatation to aid the casualty, and the NSRI rescue swimmer and the 2 lifeguards launched into the surf armed with their personal rescue torpedo buoys.

“On reaching the casualty and the good Samaritans in the surfline the rescuers took over and they assisted the man to shore safely. The surfer and the body boarder also reached the shore safely.

“At that stage additional responding rescue resources were arriving on the scene and the man, on holiday from Germany with his wife and visiting friends from Austria who live near to Herolds Bay, was medically checked by EMS paramedics and he required no medical attention and he was reunited with his wife and friends on the beach.

“NSRI commend the two unidentified good Samaritans for their assistance that contributed to the successful rescue.

“NSRI commend the eyewitnesses who raised the alarm and provided in-depth and accurate information to the responding rescue resources as the incident was unfolding which contributed to the successful rescue.”

Strong rip currents tend to lure people in because they create a false calm in the surf. When present, these powerful ‘rivers of water’ are a danger to all beachgoers because they can easily pull objects, and people, out beyond the breakers.