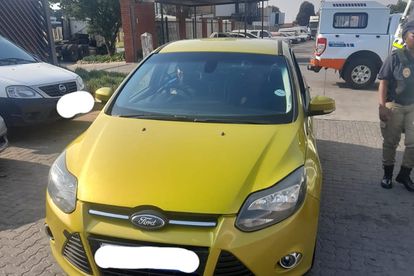 JMPD spokesperson Xolani Fihla said whilst conducting visible patrols in the Johannesburg CBD officers were stopped by a male who had just been hijacked at Commissioner and Kruis Street.

“The victim provided officers with a description of the vehicle and the direction in which it was travelling.”

He said he also alerted the officers that the suspects were all armed as he was hijacked at gunpoint.

“Officers searched and spotted the vehicle. They gave chase and managed to block off the hijacked vehicle at an entrance of a parking lot at Prichard and Small Street,” Fihla explained.

He went on to say the hijackers abandoned the vehicle and to fled the scene on foot.

He added whilst fleeing they fired shots at the officers and the officers returned fire, but the suspects managed to escape.

“The officers recovered the hijacked motor vehicle without any damages or injuries and all role players were called to process the scene,” said Fihla.

RECOVERED VEHICLE TAKEN IN FOR VERIFICATION

He also mentioned that a case of hijacking was opened at Johannesburg Central SAPS and the vehicle was booked in at the SAPS Aeroton pound for further verification.

On the same day, JMPD also arrested a Malawian national who was found in possession of a stolen motor vehicle at Rahima Moosa and Small Street in the Johannesburg CBD.

JMPD came across the suspect whilst conducting a stop and search operation at the High Court precinct along Rahima Moosa Street between Von Wielligh and Small Street. He was stopped driving a silver Nissan Xtrail without the front registration plate. Upon further investigation, the vehicle was verified stolen.

MORE ON THIS: Malawian nabbed in possession of stolen vehicle