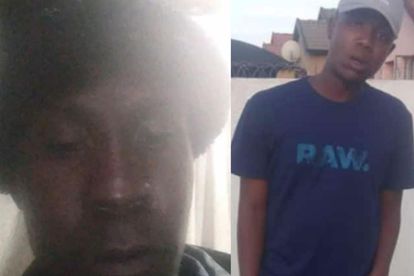 Mpho Kekana and Lusanda Ntuli from Mpumalanga who are missing. Photo: SAPS/Facebook

Mpho Kekana and Lusanda Ntuli from Mpumalanga who are missing. Photo: SAPS/Facebook

Police in Siyabuswa and Mammetlake are seeking the public’s assistance in locating the two missing men.

Lusanda Ntuli (21) from Waterval B, New Stand at Siyabuswa and Mpho Kekana (26) from GA-Maria village near Marapyane.

MISSING LEAVES HOME FOR THE SHOP AND DOESN’T RETURN

Police received a report that Ntuli left home to buy something at a nearby shop but he never returned.

On the day of his disappearance, Ntuli was wearing a grey Kappa jersey, with black jeans and military adidas tekkies.

Ntuli is dark in complexion, medium built and about 1,2 metres tall.

Anyone with information that can assist police in locating Ntuli may contact Lieutenant Colonel Jan Phofele on 0794995244.

He attended a tombstone unveiling ceremony at his neighbour’s place on the said day.

His mother saw him last at the ceremony which she also attended.

“On Monday, 16 May 2022, the family received information about his whereabouts at another village called Tshikanosi. The details further outlined that he was asking for directions to return home,”

He said the family decided to go to the said village where upon arrival a search for him was conducted, including at a nearby initiation school.

The owner of the school confirmed that Kekana indeed arrived at their premises on Monday (16 May 2022) but then left on the same day around 20:00, indicating that he was going home.

When he did not arrive home the family on Tuesday decided to report the matter to the police.

Kekana is dark in complexion and medium built.

On the day he went missing, he was reportedly wearing a grey and brown striped golf shirt with maroon trousers and black All-Star sneakers.

Anyone with information that can assist police in locating Kekana may contact Captain Solomon Moshime at 082 065 1355 or contact the Crime Stop number at 08600 10111.

Alternatively, members of the public can send information via MySAPS APP.

All received information will be treated as confidential and callers may opt to remain anonymous.

ALSO READ: Refugees take over sidewalks in front of UNHRC in Pretoria

Blair Atholl will be ‘a beast’ for South African Open field