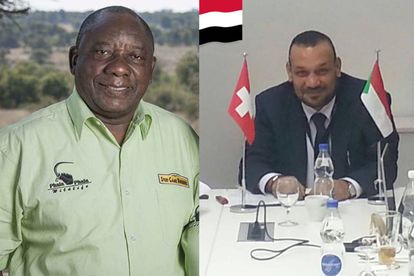 Dubai-based Sudanese business Hazim Mustafa told Sky News he bought President Cyril Ramaphosa’s buffalo through a broker working at the farm and that he had no idea the animals belonged to the President of South Africa.

UPDATE: Who is Hazim Mustafa? Three things to know about Ramaphosa’s buffalo buyer

SUDANESE BUSINESSMAN HAZIM GIVES HIS SIDE OF THE PHALA PHALA STORY

In his affidavit to the Section 89 Panel, Ramaphosa maintained US$580 000 stolen from his game farm in 2020 was the proceeds of the sale and hunting of game.

“Mr Ndlovu, upon receipt of the money, gave Mr Hazim an acknowledgement of receipt and informed him that he would inform me about what had transpired. A copy of this receipt is attached marked “MCR 1”. After Mr Hazim had left Phala Phala, Mr Ndlovu took the money and locked it in the safe at the Bayeto Centre office,” said the President.

The businessman said he was in Limpopo at the time of the purchase to celebrate his wife’s birthday and Christmas. According to his Facebook page, his wife is a South African-born woman named  Bianca O’Donoghue. In September, News24 reported O’Donoghue hails from KwaZulu-Natal.

Hazim told Sky News that he dealt with a broker and confirmed that he purchased the animals. The report raised the question of why the businessman failed to take possession of the buffalo.

The cash was stolen from a couch in the farmhouse in February 2020 – months after the purchase.

Hazim said when the buffalo deal was done, the Phala Phala game farm was meant to prepare the animals for export, but the COVID-19 pandemic threw a spanner in the works.

“The COVID-19 lockdown happened and there was delay after delay after delay… It took too long, so I didn’t get my money back but there is an understanding that I will be refunded,” Hazim said.

When questioned about how he brought such a substantial amount of cash into the country, Hazim said he simply checked it at the OR Tambo Airport in Johannesburg.

“I declared it, in Johannesburg – yes, O.R Tambo airport,” he said but refused to show Sky News the declaration forms due to the current parliamentary process.

“$580,000 is nothing for a businessman like me. I don’t know what the big issue is,” said Hazim, who is said to have ties with Omar al Bashir.

Hazim’s statement answers some questions raised by the Independent Panel but does nothing to diminish the charges Ramaphosa faces.

The panel’s report said there was prima facie evidence that Ramaphosa violated his constitutional oath and broke anti-corruption laws by failing to report the theft. The panel also put forward that the President’s game farming constituted paid work.

Ramaphosa allegedly instructed his Presidential Protection Unit to investigate the theft instead of reporting it to the police.

On Monday, the President approached the Constitutional Court to have the report set aside as unlawful.

Parliament was set to debate the matter on Tuesday, but it was delayed by a week after the Chief Whips decided that the house members must be physically present for the vote.

The National Assembly will convene in the Cape Town City Hall on Tuesday, 13 December, for the debate. If the report is adopted, Ramaphosa will face an impeachment inquiry. The ANC has instructed its MPs to vote against the report when the matter is heard.