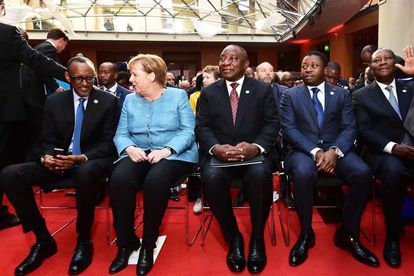 President Cyril Ramaphosa has commended German investors for their continued investment in the country, while also assuring them that concerns will be attended to as a matter of urgency.

“President Cyril Ramaphosa has commended German investors for their continued engagement with South Africa. There are around 600 German companies in South Africa, employing more than 100 000 South Africans,” said the Presidency on Tuesday.

The President addressed a breakfast meeting with senior leadership of leading German companies including industrial and professional firms, trade financiers and institutional investors. The meeting preceded the commencement of the G20 Investment Summit in Berlin, Germany.

President Ramaphosa said German companies are among South Africa’s partners in its journey of renewal after several years of poor economic performance.

“President Ramaphosa assured German investors that government was leading an effort to energise South Africans to work in unison to end corruption and achieve sustainable, inclusive growth,” the Presidency said, adding that expanded investment is needed in productive sectors to reduce the high rate of unemployment in South Africa.

Data in Statistics South Africa’s Quarterly Labour Force Survey (QLFS) for the third quarter released today showed that the country’s official unemployment rate increased by 0.3% in the third quarter, from 27.5% in the second quarter.

President Ramaphosa affirmed at the meeting the growing partnership between government, business, labour and communities as an enabler for resolving critical issues such as economic recovery and land redistribution.

“President Ramaphosa said this emerging social compact allowed social partners to listen to one another and help resolve common problems,” said the Presidency.

In the same vein, German business leaders briefed the President on their experiences in South Africa, including challenges in doing business.

The President emphasised government’s commitment to listen to the needs and concerns of investors and to address these as a matter of priority.

The President is in Germany for a working visit, which started on Monday. He has met with Chancellor Angela Merkel and German President Frank-Walter Steinmeier.