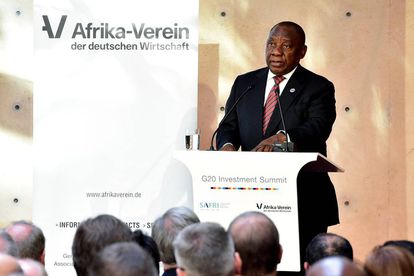 President Cyril Ramaphosa will today engage with Heads of State and Government and leaders of the global private sector as part of his participation in the G20 Compact with Africa Conference and the G20 Investment Summit.

What is the G20 Summit all about?

President Ramaphosa touches down in Germany ahead of G20 Summit

The President is in Germany for a working visit which started on Monday. The visit saw him meeting with Chancellor Angela Merkel and a dinner hosted by German President Frank-Walter Steinmeier.

President Ramaphosa will this morning address a business breakfast hosted by Prof Heinz-Walter Grobe, Chairman of the Sub-Saharan Africa Initiative of German Business (SAFRI) and Chairman of the Management Board of B. Braun Melsungen, the Presidency said.

Following the breakfast gathering, he will in his capacity as Co-Chair of the G20-Africa Advisory Group deliver remarks at the G20 Investment Summit in Berlin.

The President will also attend the German Direct Investment in Africa meeting, under the theme, “A New Era of German-African Business Relations” and later participate in the Conference on the G20 Compact with Africa.

He will this evening conclude his working visit by attending a working dinner hosted by Merkel in honour of all Heads of State and Government and chairpersons of international organisations, before departing Berlin for the Republic of South Africa. The President is accompanied by Finance Minister Tito Mboweni.