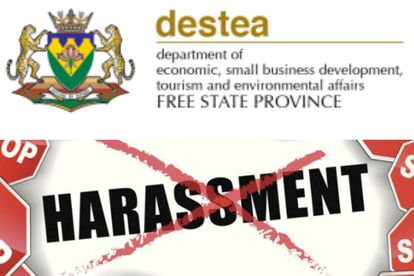 A senior Free State official was placed on special leave after facing allegations of sexual harassment.

The official works for destea

The official is from the Free State Department of Economic, Small Business Development, Tourism & Environmental Affairs (destea). A female victim who is a co-worker of the senior official opened the case against the unnamed official.

SABC News reports that the senior official allegedly sexually harassed the woman and intimated her last week. The incident is said to have happened at the Department’s Bloemfontein offices.

Destea has initiated an internal investigation

Spokesperson for the Department Tiisetso Makhele said the Department has started an internal investigation into the allegations. Makhele explained that the head of the department immediately appointed a sexual harassment advisor to investigate the incident within 30 days.

Makhele said they considered the precautionary separation of the senior official and the woman who levelled the allegations which is why the official was placed on special leave as the internal processes continue.

“The department commits to abide by all the policies, prescripts and guidelines to ensure that the matter is put to finality,”

Meanwhile, it was reported that Finance Minister Enoch Godongwana has revealed that a case of sexual harassment has been opened against him.

In a statement released in his personal capacity on Saturday, 13 August 2022, Godongwana says the alleged victim is a female employee who had offered ‘massage services’ to him and other guests during a visit to the Kruger National Park in Skukuza.

Enoch Godongwana has categorically denied the sexual harassment allegation and says he was with his wife at the time of the alleged incident. Godongwana was interrogated by police where he denied the allegations levelled against him.

Godongwana says he will not step down from his portfolio as the allegations of sexual assault levelled against him are nothing but a smear campaign. Read the full story here.