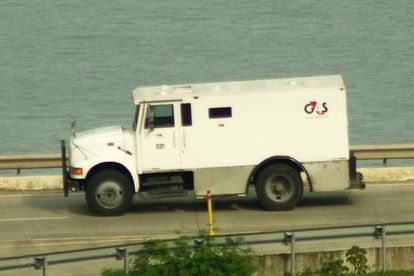 Four suspected cash-in-transit-robbers were killed during a shootout with SAPS on Friday, 12 August in Johannesburg. In a statement, the South African Police Service (SAPS) revealed that the shootout ensued following a cash-in-transit robbery along Nasrec Road in Soweto.

CiT vehicle was shot at on Nasrec Road

It’s been reported that the driver of the cash-in-transit vehicle was driving on Nasrec Road with a crew member. They suddenly found themselves under gunfire from the suspects. The SAPS’ Lt Col Robert Netshiunda says the driver managed to drive until the vehicle came to a standstill on Juskei Road.

“Suspects allegedly robbed the security guards of their cellphones and one firearm before fleeing the scene with an undisclosed amount of money,”

Four suspects were fatally wounded and one was arrested

It was revealed that the suspects shot at the SAPS and a shootout began. Four suspects were shot and declared dead at the scene while one suspect was arrested. A police officer sustained gunshot injuries and was transported to a hospital for medical care.

The SAPS has urged anyone with information regarding the whereabouts of the remaining suspects to contact their nearest police station or call their crime stop number 08600 10111 or inform the police anonymously through the MySAPS App.

It was previously reported that 30-year-old Odwa Siqanqalala was sentenced to 15 years DIRECT imprisonment. Siqanqalala was part of a cash-in-transit heist in Whittlesea that occurred on 30 November 2018.

With a rise in cash-in-transit heists across SA, the Whittlesea Magistrate’s Court made an example of Siqanqalala. Siqanqalala was convicted on charges of robbery with aggravating circumstances.

He pleaded guilty on Wednesday, 25 May, at the Eastern Cape-based court. Siqanqalala was arrested with his co-accused. 32-year-old Lundi Mzimkhulu and 35-yer-old Mzuvukile Mzimkhulu. The trio were arrested on 30 November 2018 and were remanded in custody. Read the full story here.