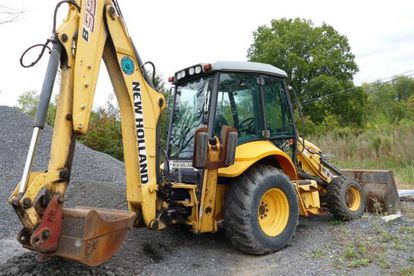 A Limpopo man was sentenced to five years for scamming his girlfriend out of R470 000. Photo: JMK40 / Flickr

A Limpopo man was sentenced to five years for scamming his girlfriend out of R470 000. Photo: JMK40 / Flickr

Pontho Emanuel Ramothuma has been sentenced to five years behind bars for a tractor-loader-backhoes (TLB) scam.

The accused swindled his girlfriend out of R470 000

The 38-year-old Limpopo man scammed his girlfriend into investing R470 000 into a fake TLB business. TLBs are used in construction and farming. Ramothuma was sentenced after appearing before the Polokwane Specialised Commercial Crimes Court on Thursday, 11 August.

The spokesperson for the Hawks Captain Matimba Maluleke said the incident occurred in September 2019. Ramothuma allegedly requested that his girlfriend enter a joint business venture to ‘strengthen their relationship’.

Maluleke said all was fine until Ramothuma’s partner requested to see the large machine and he instead presented fake documents as proof of purchase.

“The accused requested his partner to help buy a TLB for their potential business. The victim deposited R470,000 into the account of the accused. After some time the victim requested to see the machine and the accused presented fake documents as proof of purchase,”

Ramothuma’s partner proceeded to report the incident to the Hawks for further investigation and he was subsequently arrested. Maluleke said after a thorough investigation, the Hawks found that Ramothuma did not purchase a TLB but used all the money on himself, reports TimesLIVE.

Meanwhile, it was previously reported that a 51-year-old male and a 28-year-old female were arrested in Khayelitsha and Parklands for their alleged involvement in a romance scam amounting to R930 000. The two suspects were arrested on Friday, 22 July.

Police members of the Provincial Commercial Crimes Cyber Investigation unit conducted a tracing operation in the early hours of Friday, 22 July 2022 in Khayelitsha and Parklands with the intention to arrest suspects in a romance scam amounting to R930 000-00.

According to Western Cape police, members of the Provincial Commercial Crimes Cyber Investigation unit conducted a tracing operation which led to the arrest. Police said they believe the two are directly involved in a romance scheme, receiving money from their victims, on charges of fraud, theft, and contravention of the prevention of organised crime. Read the full story here.