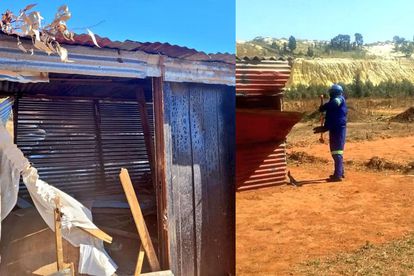 The Johannesburg Metro Police Department(JMPD) is seemingly relentless to curbing the scourge of land invasions in the city.

JMPD SHOWING NO SIGNS OF GIVING UP

Another segment of the gruelling operation took place earlier today, Saturday, 13 August, with JMPD roping in private security for assistance.

JMPD reported that the illegal land Invasion operation was conducted by their officers together with Mjayeli and Matla A Morwa security companies at Braam Fisherville Phase 2 in Region C.

“Approximately 44 unoccupied galvanized zinc sheet (shacks) structures were demolished and removed and there was no resistance encountered.”

JMPD said the community welcomed the operation and the removal of the illegal structures.

Prior, JMPD also demolished illegal shacks erected on the sidewalk at Melrose and De Villiers Streets in the Johannesburg CBD. The demolished wooden doors were confiscated. In the process, the operation also saw the confiscation of goods from illegal traders.

On 30 July, the operation descended on Princess and Kysand, north of Joburg, where land invasion had gotten to uncontrollable heights.
Ensuring they clamped down on the crisis, the officers also collaborated with private security to have sufficient manpower to break down the incomplete structures.

During the operation, 56 unoccupied and half-built galvanized zinc sheet (shacks) structures were demolished and removed.
Illegal electricity and water connections was also removed and disconnected.

“We encourage members of the public who witness or have any information regarding illegal land invasions to call the Anti-Land Invasion Hotline on 080 012 0555.”