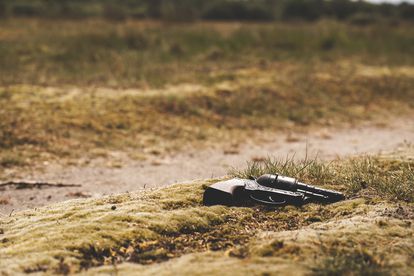 Three men have appeared in court for the farm murder of a 44-year-old woman and the assault of her 65-year old mother at Sundra, a small town near Delmas in Mpumalanga.

One of those arrested is a 40-year-old farm worker who was made to strip naked by two attackers and then tied up. Police allege that “all the drama of the man being tied up was nothing else but an act” and that he was part of the plot.

The trio appeared in the Delmas Magistrate’s Court on Friday after two of them were apprehended on Wednesday by community members who were part of a neighbourhood watch group.

Caught after their vehicle overturned

They were involved in a high-speed chase with the neighbourhood watch members and were caught when the bakkie they were driving, which had been stolen from the farm, overturned on the R50.

The attack on the smallholding occurred at around 1pm on Wednesday when Chantel Kershaw, aged 44, was outside with the employee and saw two armed men in the yard.

After stripping and tying up the farm worker, they allegedly attacked Kershaw and strangled her to death, before entering the house and encountering her mother, identified in the media as 65-year-old Grieta Spiers. They assaulted Spiers with a firearm and also tied up the domestic worker and locked her in the bathroom, according to a report by Maroela Media.

The attackers then loaded various items from the farm into the bakkie and fled the scene on the N12 heading towards Pretoria, where they were spotted by the neighbourhood watch members who had been alerted by Spiers.

SAPS spokesperson, Brigadier Leonard Hlathi, said an illegal firearm and ammunition were seized, as well as a blood-stained jacket. Items stolen from the smallholding were also recovered. The farm worker was arrested during the follow-up investigation.

Mpumalanga Provincial Commissioner, Lieutenant General Mondli Zuma, welcomed the collaboration between the farming community and the police which led to the arrest of the suspects.