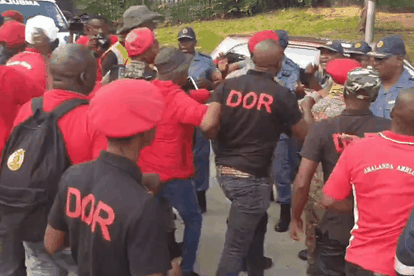 Unsavoury scenes have been reported from Johannesburg on Friday, after the EFF’s Eskom March got off to a tumultuous start. Hundreds of supporters are making the trek to Megawatt Park in protest of the utility’s poor performance – and potential privatisation in some parts – but it hasn’t been a quiet occasion.

Footage has emerged online of a group of EFF followers confronting SAPS officers. Buoyed by large crowd numbers, the rowdy marchers face off against law enforcement. There’s pushing, shoving and some very faint jabbing – but it’s nothing we haven’t seen from the elected Red Berets in Parliament before.

Tensions threaten to boil over before a gathering of more composed demonstrators arrive to break-up the confrontation. Massively outnumbered, the SAPS officers decided against escalating the situation.

@EFFSouthAfrica members and truck drivers clash with police ahead of the #EFFEskomMarch. The members blamed police for the incident saying police were provoking them. #Newzroom405 @Newzroom405 pic.twitter.com/zApMNyUiLT

#EFFMarch A bit of chaos at the @EFFSouthAfrica March to Eskom this morning with a stand off between truck drivers ,DOR and the police. #sabcnews pic.twitter.com/bPsymmkFhy

EFF Eskom March – why the protest action is taking place

The Eskom March got underway at 9:00, and the epic 11-kilometre walk to Megawatt Park will take participants an estimated three-and-a-half hours. There is a heavy anti-Pravin Gordhan sentiment present, as EFF supporters place the blame of load shedding on the minister’s shoulders.

Truck drivers and industrial workers are also fighting against an alleged wave of retrenchments forecast to hit the company. With a massive rebuilding job needed at Eskom, it’s likely the restructuring could hit the blue-collar workforce harder than anyone else. They may be fighting for their futures, but fighting with police officers won’t get them anywhere fast.