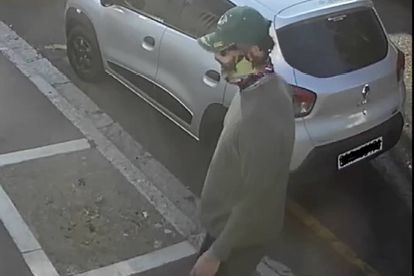 Cape Town police have released pictures of the person they believe is the suspected shooter in the alleged hit on a prominent attorney.

The attorney was shot twice in his vehicle at around 07:50, in Constantia Street, Cape Town. According to police spokesperson Colonel Andre Traut, a suspect captured by CCTV surveillance was spotted leaving the crime scene with his face masked, wearing a Springboks cap.

Traut confirmed that the suspect is left the scene in a silver/charcoal Hyundai H1 minibus (see images below).

“The images were captured with surveillance cameras on the morning of 12 February 2020 close to the crime scene where a 53-year-old attorney was shot and wounded in Constantia Street, Gardens, Cape Town,” Traut noted in a statement.

The Cape Town police, cautious about the information they have collected so far, indicated that they strongly believe that this man, caught leaving the crime scene, is the attempted murderer of Van Der Merwe.

“The suspect, who is a white male fired two shots at his victim from a seated position in his vehicle, wounding him in the neck. At the time of the incident, he was wearing a mask to disguise his identity and a Springboks supporter’s cap. We have reason to believe that the suspect was alone during the commission of the crime,” Traut added.

The motive behind the incident has not been established as yet. However, Cape Town police firmly believe that the attack on the attorney is an alleged hit, linked in some capacity to his profession.

Anyone with information on the suspect or the vehicle that he allegedly left in, is encouraged to contact the police.

“All information will be treated confidentially and you may remain anonymous,” Traut assured.