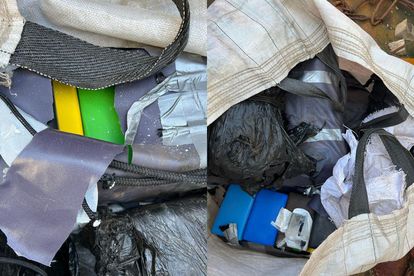 Cocaine worth more than R100 million was seized over the weekend. Photo: SAPS.

Cocaine worth more than R100 million was seized over the weekend. Photo: SAPS.

The Hawks’ South African Narcotics Enforcement Bureau (SANEB) in Durban seized a shipment of suspected cocaine from a vessel in the local harbour over the weekend. The source of the drugs remains a mystery at this stage.

Warrant Officer Bonnie Nxumalo said the shipment was seized on Saturday, 18 June after the Hawks and police were tipped off about a suspicious consignment aboard a vessel that was ferrying trucks.

“The team arrived at the said place and recovered canvas bags with 265 bricks of cocaine,” said Nxumalo. The seized cocaine has an estimated value of R111 million.

The preliminary investigation failed to trace the owner of the shipment. The drugs were seized as part of an ongoing inquiry into the source of the suspected cocaine.

No arrests have been made thus far.

In an unrelated incident, the Hawks seized cocaine worth more than R240 million in December 2021. On that occasion, the drugs weighed more than 600 kilograms and no arrests were made either.

Hawks spokesperson Brigadier Nomathandazo Mbambo said the drug bust came after the authorities received a tip about a vessel sailing to South Africa from South America with drugs hidden under the wooden floorboards.

“On arrival at the harbour, the containers were searched. It was discovered that between the boards, there were large black sports bags, each containing bricks of cocaine,” said Mbambo.

Two dead after drowning during baptism ritual at Limpopo dam