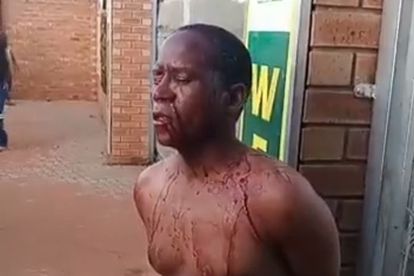 A Deputy Principal at a school in Limpopo is currently nursing his wounds after he was beaten to a pulp for allegedly sleeping with a learner in school.

It is reported this Deputy Principal at Kgagatlou Secondary School was caught pants down with the learner whose age and name have been protected.

Polokwane Weekly reports that community members confronted the educator and assaulted him.

CLIP GOES VIRAL OF THE EDUCATOR GETTING HANDS

A video of the assault went viral on Monday, showing a heavily beaten individual, believed to be the deputy principal, with blood covering his entire face and upper body.

The Limpopo Department of Education reacted to the incident by releasing a statement saying that they are aware of the video of the heavily assaulted principal.

“The Limpopo Department of Education is aware of the video clip of the Deputy Principal of Kgagatlou Secondary School that is making rounds on social media.”

“The educator after was allegedly assaulted is accused of having a sexual relationship with a learner at the school where he works.
The matter is receiving urgent attention and the Department is taking the allegations very seriously. We are currently following on the matter to establish facts,” the rest of the statement read.

It is likely that this scandal finally caught up with the Deputy Principal. It also alleged that the same teacher was embroiled in another similar scandal at Monyaku Secondary School where he left allegedly running away to account for his statutory rape cases which eventually disappeared in thin air.

The South African has not learnt of any arrest in relation to this matter yet.