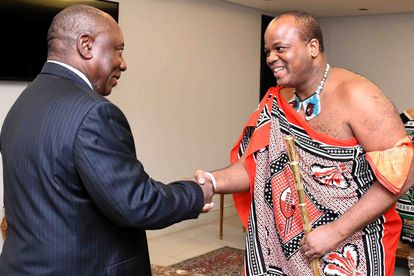 President Cyril Ramaphosa receives a courtesy call from His Majesty King Mswati III of the Kingdom of eSwatini at OR Tambo International Airport.
Photo: Jairus Mmutle/GCIS

President Cyril Ramaphosa receives a courtesy call from His Majesty King Mswati III of the Kingdom of eSwatini at OR Tambo International Airport.
Photo: Jairus Mmutle/GCIS

The Congress of SA Trade Unions (Cosatu) believes South Africa should isolate Swaziland, both politically and economically, because of the perception of how poorly its citizens are treated.

Cosatu has accused King Mswati of abusing his power by exploiting the people of the Kingdom of eSwatini (Swaziland).

Swaziland is an absolute monarchy, meaning King Mswati wields absolute power and is not restricted by written laws nor does he have to answer to parliament.

What’s more, Cosatu accused the African Union and Southern African Development community of being a party to the abuse.

“We will not sit idle while the monarchy ill-treats its people. What makes this more sad is that both the African Union and SA Development Community are colluding with the regime and condoning this subjugation,” Cosatu in KwaZulu-Natal said in a statement.

“People of eSwatini deserve institutions that will represent their aspirations of freedom of choice and freedom of speech.”

Cosatu sighted a lack of decent healthcare programmes, a failing education system, and a lack of media freedom as proof of a failing administration.

“The state is paralysed and the country is on the verge of collapse. People are dying because of the failing health system, children and women are raped, workers are striking and protesting for wage increases, taxes have escalated exorbitantly, university students are targeted, and the judiciary is centralised by individuals,” claimed Cosatu.

“The feudal state is failing to comprehend the demands of its citizens while some questionable and corrupt characters in the business community are looking at eSwatini as a business haven.”

The conglomerate of unions revealed it would be running a series of awareness campaigns within KwaZulu-Natal.

“The federation calls on all progressive forces to agitate for the economic and political isolation of the Mswati government. This campaign needs to be strengthened and intensified so that the exploited and oppressed people of Swaziland can be freed from the shackles of the Mswati regime.”