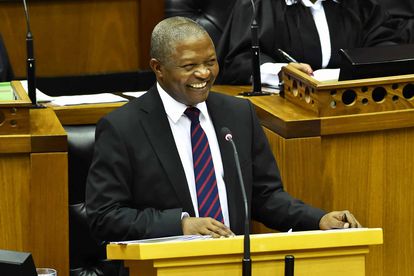 It is quite surprising to think that Mabuza was afforded, for the most part, the dignity to conduct his business.

While there were instances where opposition leaders from the DA and EFF called points of order for questions not related to the theme of the day, Mabuza held his cool and maintained decorum throughout the sitting.

Scoffing off the possibility of disruptions, which he has come to expect in these occasions, Mabuza made it clear that:

“All of us here are duty-bound to make this Assembly a critical instrument in bridging the social distance between the people and ourselves as public representatives.”

Most of the questions Mabuza had to deal with were centred around the plight faced by South Africa, as it grapples under the immense pressure of an ailing economy and high levels of unemployment.

These are the five key questions Mabuza responded to:

How does the government intend to grow the township economy as a vehicle for inclusive economic growth?

Mabuza confirmed that one of the ways of addressing rampant poverty and unemployment was to transform townships into investment hubs.

He admitted that township businesses face problems that require government intervention and that Ramaphosa, since taking up his role as President, has been hard at work in “revitalising the rural and township economies to ensure that we transform townships and villages from labour and consumption reserves into thriving productive investment hubs”.

“As a matter of priority, we need to strengthen our institutional capacity to enforce applicable laws and regulations to enhance the ease of doing business, prevent anti-competitive behaviour, and minimise conflict in the township and rural economic spaces.

“Revitalising the rural and township economies requires to focus on the twin objectives of investing in economic infrastructure and enterprise development, on one hand, and consistent application of, and adherence to, the regulations as provided for in our laws on the other hand,” Mabuza said.

How does the government plan on addressing the challenges in municipalities designated as service delivery hotspots by the Auditor-General?

The Deputy President revealed that the Department of Cooperative Governance and Traditional Affairs has received notice from the Auditor-General about a total of 48 municipalities that require special intervention.

He confirmed that the department has committed to applying stringent measures that will ensure that the AG’s recommendations will be implemented through key support systems that ought to improve leadership and governance in the metros.

“Through the Municipal Infrastructure Support Agency, struggling municipalities are supported to accelerate the implementation of infrastructure projects that address the delivery of basic services such as water and sanitation. This support also includes procurement, contract management, project management, infrastructure maintenance, and the overall institutional capacity to roll out key developmental infrastructure,” he explained.

What is the government doing to provide drought relieve support for farmers in the Northern Cape?

David Mabuza revealed that the Department of Agriculture, Land Reform and Rural Development has set aside a relief funding package to assist the agriculture industry in the Northern Cape, Free State and Eastern Cape.

He detailed how, in the last administration, more than R200-million was funnelled from the then National Department of Agriculture, Forestry and Fisheries “to various provinces for implementation of projects according to their needs assessments.”

“In cases of drought, municipal and district agricultural offices guide farmers in terms of legislated processes relating to support as outlined in the Disaster Management Act, 2002. This Act stipulates that provinces and municipalities must set aside a percentage or reprioritize their budgets to address the disaster in terms of relief and recovery.

“When this percentage has been exhausted, the province or municipality may access funds from the National Revenue Fund, which is managed by National Treasury through the National Disaster Management Centre housed at the Department Cooperative Governance and Traditional Affairs to deal with all disasters,” he added.

Does the government have any intervention measures in place to address youth unemployment?

The Deputy President reiterated the points he made in his response to the question around the government’s plan on addressing the growth of the township economy.

He noted that dealing with youth unemployment was one of the key focuses of the government. David Mabuza admitted that:

“We have to find ways to open up markets so that new enterprises can compete fairly… We need to direct industrial funding towards our youth to provide the capital for the growth and expansion of their ideas.”

What is the current status of the Public Employment Programme?

This, David Mabuza noted, was one of the most important aspects of the National Development Programme (NDP) — to achieve a decent standard of living for all South Africans.

The Public Employment Programme, he said, focuses on enhancing the acquisition of skills while also ensuring that the young, ambitious workers receive stipends to sustain themselves and contribute towards the economy.

David Mabuza revealed that the programme is currently in its fourth phase. He stated that so far, the programme has created 10 million work opportunities and paid out an estimated R64-billion in wages.

“As it enters its fourth phase, the Expanded Public Works Programme will continue to draw a significant number of the unemployed South Africans, especially our youth, into productive work in a manner that will enable them to gain skills and increase their capacity to earn income, and contribute towards the betterment of our country,” he explained.