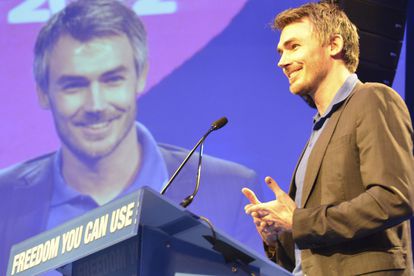 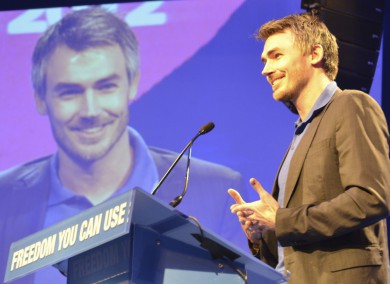 IN the shadow of the South African Parliament I wait for Tim Harris MP, Shadow Minister of Finance and universally beloved poster-boy for the Democratic Alliance, as suddenly it dawns on me that this will be the first occasion that I shall be speaking to an actual South African parliamentarian. For a second I ask myself whether the experience will turn out to be any different from meeting politicians and dignitaries back in the UK, but before I can even finish the thought Tim appears seemingly from out of nowhere.

While exchanging pleasantries and introductions we dig into a pot of coffee, which always is a gamble in South Africa: will they serve you actual ground beans or just present stirred up instant carcinogens? Much to my delight, we share a nice few cups of freshly brewed java, as I try to learn more about the charismatic Democratic Alliance politician who seems to work overtime examining how South Africa can grow into a leading worldwide economy.

“If you make sure that this democracy works, our potential to succeed in the world is significant.”

This is one of the first things he tells me, and he knows that he’s got my attention. However, instead of just listening to what quotes I can tease out of him, I rather want to understand Tim Harris as a product, as a brand: what Tim is presenting to me is a highly polished view of South Africa’s future, especially with regard to the economy. I continue to observe, for instance, how Tim Harris doesn’t seem to care for an actual breakfast; I can only assume that he is running on a diet, which is probably based on protein bars and salads (although he insists he eats whatever he likes to eat).

You can ask anyone in South Africa and you’ll probably hear agreement in unison that Tim Harris is the most handsome man in politics – even his adversaries think so. But I’m hardly meeting him to discuss his skin care regimen or work-out routine. What fascinates me much more is how he radiates an inherent understanding of the contemporary zeitgeist of SA politics. Listening to Tim Harris makes me feel as if I’m almost listening to an erudite audio book version of “South African politics for Dummies”, putting me firmly in seat of said dummy.

“South Africans have to vote for change as their first obligation. And second, they have to open up their eyes to the potential of this continent. Most South Africans don’t know what’s happening on their continent. For instance, tell me, what do you know about Gabon?”

Nevermind Gabon, I can barely find my way around the Mother City. But Tim seems to have made it his destiny to understand what South Africa needs by understanding the country in its African context. Our entire coffee chat revolves strongly around the relationship between South Africa and the rest of the continent while Tim also elaborates on what he considers to be significant discrepancies within SA, holding the country back from all it can achieve:

“The fate of South Africa is inherently linked to the fate of the rest of Africa. In fact, South Africa is the only economy in Africa with a significant manufacturing base. Our country has done well globally but is ignoring African markets, mainly because of political and diplomatic failures on part of the current government. And unfortunately, there are no indications of South Africa becoming more competitive on this continent under that current political climate.”

And he knows what he is talking about: Tim took a two-year sabbatical from his career in politics in 2007 – not because his job was getting too much or because he wanted to focus on any other career aspirations – but to simply learn more about the continent that he was born into. Along with two friends he decided to travel up the west coast of Africa and then on through Europe and all the way to London, while enjoying a little bit of surfing along the way. It sounds like the sort of epic adventure that only few people dare to take on these days.

“Why fly to London when you can drive?” he jokes, while the reality of his trip actually took him and his friends through conflict zones and countries destroyed by civil war. “That pot of coffee you’re drinking there: do you know where it comes from? Do you know under what circumstances it is harvested?”

I simply take another sip, as I listen to some of the lessons that Tim learned on his journey through Africa – like being stuck in the Congolese jungle with a failed car battery. After all this exploration, Tim says that he is now trying to inspire young leaders to understand more about how to best harvest the African continent’s potential, saying that it remains a much-misunderstood place.

With quotes like that, it is evident that he is out on a charm offensive ahead of the 7 May national elections – and with good reason: in the last elections, the DA managed to get just under 17 per cent of the overall vote, continuing a growing trend over the years. But this time around, the party is hoping “to do significantly better than that,” as Tim confirms without disclosing any firm projections.

While his hopeful attitude may inspire many of his fellow party member, as he continues to tour the country alongside other DA heavyweights during widely publicised election rallies, it is clear that the DA has its work cut out for itself: above all, the party is competing to retain control in the Western Cape in the provincial elections – the only province that is currently held by the Democratic Alliance but challenge by a growing ANC electorate. In addition to the Western Cape, heavy campaigning is also focusing on the Northern Cape and Gauteng Province, which Tim says the party is “excited” about, with DA spokesman Mmusi Maimane pushing for change there. But it is unlikely for the ANC to even fall below the 50 per cent mark in that province, where they are targeting the emerging black middle class as the party’s future base, as the struggle generation is beginning to be confined to history books.

With publicity debacles like the failed merger of the Democratic Alliance and Agang SA earlier this year, and with a growing number of DA defectors, Tim’s optimistic messages may begin to fade amid the noise of the very politics of politics themselves, as the DA and Agang are having a go at each other once more on the Twittersphere. Nonetheless, Tim maintains that his party’s objective is to move SA forward and “in the next two national elections to get into a coalition government, which will most likely be a coalition of current opposition parties.”

I slightly choke on a sip of coffee and interrupt, asking, “and how exactly do you want to go about doing that?”

“The ANC is obsessed with the past. At the DA, we honour the past, but own the future. We have something better to offer, especially to young voters. We have young candidates for young voters. The increase of young votes for the DA is encouraging, as it is very racially diverse as well.”

Perhaps it is indeed that element of youth that keeps the party focused and driven. To be honest, it feels almost odd to witness anyone talk with such conviction anywhere in the political landscape of South Africa – especially someone as young as Tim Harris and especially not over an innocent cup of coffee on a Friday morning.

Aged 33, he’s just recently celebrated his 10-year anniversary in politics, having started 2004 as a parliamentary economics researcher before moving on to work under Tony Leon as his Chief of Staff while Leon was the leader of the Democratic Alliance. Now under Helen Zille, his role as the Shadow Minister of Finance requires him to routinely widen his gaze to outside South Africa’s borders, keeping abreast with what’s happening elsewhere in the world.

“South Africa is underperforming compared to other emerging markets around the world because of our politics. Our growth rate is in some cases half that of other emerging markets. The DA policy is exactly designed around achieving higher growth. We are a market-orientated party. We want to create growth and jobs. The DA is always engaged in an internal dialogue to improve what we can do for our electorate. There is no dissonance within our party. There is no such internal dialogue to create consensus in the ANC. The Problem with the ANC is that there is no coherent ideology to trust or follow. Their economic development plans are incompatible with what the rest of the ANC does. That lack of direction scares potential investors away from us. South Africa lacks investor certainty because of lack of single, coherent economic policy.”

Of course, being an opposition politician it comes as part of Tim’s job remit to criticise the powers that be. And with a growing trend of anti-ANC sentiments across Mzansi on account of President Jacob Zuma’s falling popularity, he might well be hitting a popular nerve. However, we never get to cover the interesting subject of the taxpayer-funded vanity project known as Nkandla or other fiscal issues, which he might be just the perfect resource to quiz about, as we run out of coffee and, probably, time (or is that Tim?).

I ask him what his final thoughts are ahead of the election.

“Remember, there is a huge potential in this continent and indeed in this country. But the real, final test of South Africa’s democracy will be at the ballot box.”