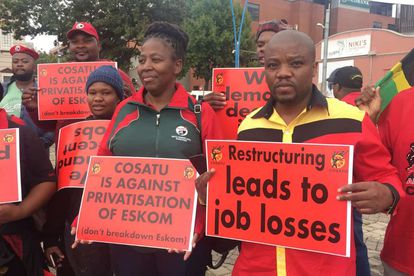 On the eve of the much-anticipated budget speech 2019, the Congress of South African Trade Union (COSATU) has issued its list of expectations from Finance Minister, Tito Mboweni’s address.

On Tuesday, the trade union federation is set to embark on the second part of its national strike in the Western Cape.

Job losses and Eskom are at the top of COSATU’s agenda. The trade union federation also issued a list of key topics they expect Mboweni to touch on when he takes the podium in Parliament.

Roll out of an improved public transport system

We have yet to get the statistics of the other eight provinces with regards to the festive season death toll figures but in the Western Cape, we have seen a 6% decrease.

COSATU says it wants a clear and concise strategy from Mboweni on how the government plans to increase the efficiency of our public transport system and road safety measures.

Plans to address Department of Water and Sanitation issues

COSATU also wants to hear about how the department of water and sanitation will be addressed.

More importantly, Mboweni is expected to touch on the crisis that is the Giyani Water Project.

The trade union federation says it wants a clear understanding as to how the project was allowed to balloon from R40-million to R4-billion.

COSATU want to hear Mboweni orally announcing his support for the PIC Amendment Bill that was born out of the scandal that has plagued Africa’s largest investment fund.

The Bill was tabled by the DA, as a means of regulating the PIC Act which, in the opposition party’s eyes, allowed for all the corruption and mismanagement of funds to take place.

“The PIC requires officials and administrators who are beyond reproach and not politically connected. A vote against the DA’s bill will essentially be a vote in favour of having government workers’ hard-earned pensions looted and squandered.

“Before appointing a new Board, the DA’s PIC Amendment Bill must be considered, as it provides a superior governance structure and will provide greater protection to the hard-earned pension funds managed by the PIC,” the party said in a statement.

Plans to mobilise local investors to play their roles

While COSATU acknowledges the efforts made by President Cyril Ramaphosa in attracting foreign investment, the trade union federation warned that local investors might get away with a lot with all the attention removed from them.

COSATU expects to hear how Mboweni and the government plan on regulating the performance indicators of local investors, ensuring that they too are playing a role in uplifting society out of poverty and promoting inclusion.