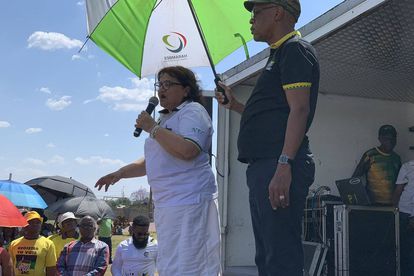 The embattled ANC spokesperson, Pule Mabe, has been vindicated. The political party has revealed that Mabe will resume his duties while a decision is yet to be made on where to place his accuser.

Why was Pule Mabe accused of sexual harassment?

The 26-year-old female who was employed as Mabe’s personal assistant came out in December accusing the spokesperson of sexual harassment.

Her employment into the position did not follow the conventional interview process, according to the 26-year-old.

“You would know that I never went through any interview stage as part of my entry tool as a Personal Assistant to the National Spokesperson, I was on the 22nd of July 2018 verbally informed by comrade Pule that I will be starting off a new job as his PA on the 1st August 2018…

“I studied Public Relations at the IIE Varsity College but my challenge was that I can’t at the moment present my qualification as I have a huge academic debt that I am still paying off. My CV, if anything, also states that I have no experience of working as a PA, but of course life sometimes is all about taking risks and great opportunities when being presented with them…” The personal assistant wrote in her grievance letter to the party.

There were three separate incidents the woman referred to where she claims to have felt uncomfortable with Mabe’s sexual advances,

It even got to a point, according to the personal assistant, where Mabe allegedly punished her for refusing his advances.

She alleged that her salary was cut and most of the incentives she was awarded were revoked by Mabe.

The ANC, upon reception of the letter, formed a grievance panel chaired by Jessie Duarte.

Following months of investigation, the panel reported back to the party with recommendations.

In summation, the panel claims to have found no evidence that supports the personal assistant’s allegations of sexual harassment.

However, this, the party said, is a teachable moment for the ANC and its members.

The party has since formed a new policy which oversees its employees’ conduct in the workplace.

According to the party’s spokesperson, Dakota Legoete, the policy will ensure that there is a strict platonic relationship between management staff and their subordinates.

“The lines should be drawn properly, in terms of quality and relationships at a workplace,” Legoete said.