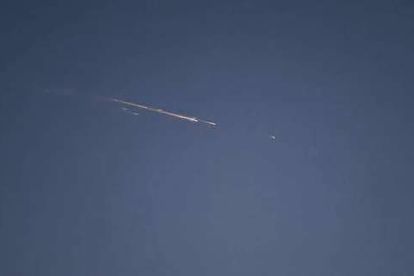 South Africans were treated to a spectacular show in the sky on Tuesday evening as large shooting star known as a bolide could be seen from all over SA.

This show was watched from all over South Africa.

IT WAS NOT A METEOR SHOW BUT A BOLIDE

Dr. Daniel Cunnama, science engagement astronomer at the SA Astronomical Observatory explained that it’s is not a meteor shower but a bolide.

This spectacular show was watched from all over South Africa on Tuesday evening.

“A bolide is a single meteor breaking up on entry.”

“A bolide is a very bright meteor. We expect probably 10s of them per year, but we can’t predict when or where. They are from rocks of 1-10m across entering our atmosphere and breaking up.”

He furthermore said it was a once-off event and said it could also be described as a shooting star.

Social media was abuzz on Tuesday evening. Excited South Africans shared their videos and photos all over social media platforms.

With some joking saying aliens have come to help us find that 500 billion.

According to the Centre of Near Earth Object Studies fireballs and bolides are astronomical terms for exceptionally bright meteors that are spectacular enough to be seen over a very wide area.