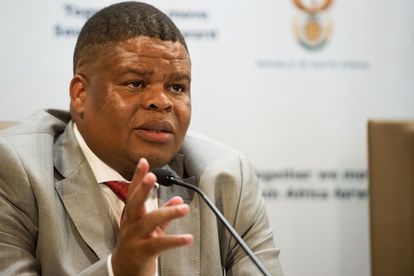 The Congress of the People (COPE) has announced it intends to file criminal charges against Deputy Minister of Human Settlement, Water and Sanitation David Mahlobo after he was implicated in the final instalment of the State Capture report.

The State Capture Commission found that Mahlobo, who was State Security Minister under Jacob Zuma, was instrumental in pursuing the former president’s narrow personal and political interests at the State Security Agency (SSA). Mahlobo is said to have collected large sums of money under the guise of an operation, allegedly for Zuma.

“…The Party will also announce our demands to the Speaker of the National Assembly with regards to all implicated members of Parliament in the Zondo Commission report. We are saying it cannot be business as usual. We believe that the dignity and integrity of Parliament must be restored. We will ensure that the Zondo Commission’s recommendations are implemented,” Bloem said.

In addition, the party has called on Parliamentary speaker Nosiviwe Mapisa-Nqakula to restore the dignity of Parliament by acting against all Members of Parliament who are implicated in the report.

Fraser himself filed charges against President Cyril Ramaphosa over a robbery on his Phala Phala farm, but COPE has made it clear this has nothing to do with why they are gunning for him.

“We are not concerned about the fight between Fraser and Ramaphosa nor the fact that he had opened a case against the president. Our main concern is that state intelligence is the heart and soul of any country and if that is compromised then any country is susceptible to foreign attacks,” Bloem said.