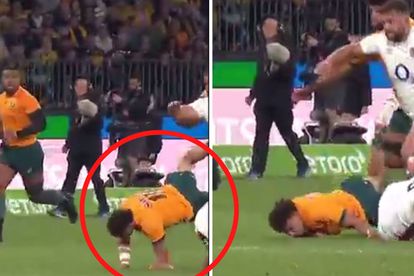 In the SHOCKING video Banks is seen landing awkwardly on his arm, causing an apparent break.

According to Wales Online, the 28-year-old was forced off 23 minutes into his side’s clash with Eddie Jones’ side, who were leading 6-0 at the time.

Replays showed with Sky Sports commentator Miles Harrison apologising for the graphic nature of the replays as the game was halted for nearly five minutes.

IT WAS JUST ONE OF SEVERAL BLOWS FOR THE WALLABIES

The publication said it was just one of several blows for the Wallabies during an eventful first half.

Firstly, Quade Cooper was forced out shortly before kick-off, before Allan Alaalatoa withdrew with an HIA shortly after Banks departed.

Then, Australia’s woes were compounded shortly before the break as Darcy Swain was sent off for a headbutt on Jonny Hill.

Meanwhile, the Springboks snatched the win against Wales with the game’s final kick on Saturday.

SPRINGBOKS SNATCHED THE WIN AGAINST WALES

Wales prop Tomas Francis was forced to leave the field after just minutes on the pitch after taking a knee to the head in a tackle.

The 30-year-old front-rower came on for Wayne Pivac’s men in the second half of their opening Test against the Springboks in place of Dillon Lewis, but was soon departing after putting in a low tackle which resulted in the prop apparently being knocked out.

The game in Pretoria was halted for around seven minutes while he received medical attention before he was removed from the field on a stretcher via a buggy with his head in a brace.

THE GAME WAS HALTED FOR SEVEN MINUTES

Springbok captain, Siya Kolisi, complimented Willemse for his performance, having moved to the flyhalf berth after Elton Jantjies was benched.

“We had to chase the game at times. The boys at the back took their opportunities well.”

Speaking post-match, Captain Kolisi said the Springboks would have to bring the intensity from the word go in the second test in Bloemfontein.

‘WE PLAYED IN THE RIGHT ARES AND TOOK OUR CHANCES’

Welsh Captain, Dan Biggar, who was one of four Welshmen to spend a stint in the sin bin, said he was proud of his team, who put in a huge effort since being written off from the start.

“We played in the right areas and took our chances.”