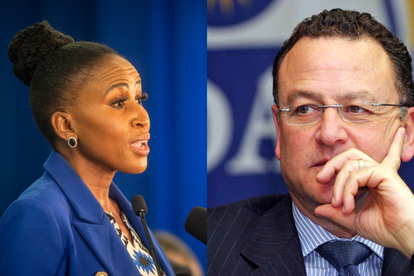 It all started when Leon commented on Phalatse’s strategic planning session, saying her office needed to focus on fixing pavements, potholes and traffic lights.

Phalatse didn’t take too kindly to Leon’s criticism, responding: “You’re too old for this twitter trolling behaviour of yours. If you want to contribute constructively to the rebuilding of the city please send an email to MikeMo@joburg.org.za”

Former DA Deputy Chief Whip Mike Waters then joined the conversation on Twitter, calling out Mpho Phalatse for her response to Tony Leon. Waters labelled Phalatse’s comments as “extremely disrespectful” and told her she wouldn’t be Joburg’s mayor had it not been for Leon.

“Extremely disrespectful, to say the least. If it were not for Tony the DP/DA would not exist and you certainly would not be mayor. A little humility is in order,” he said.

Phalatse didn’t take Waters’ remark lying down and responded by saying: “What’s even more concerning is that you actually believe what you’ve written. The people of the DA make the party, each and every single one of them. We will not stand by and allow retrogressive behaviour to fester in the name of humility.”

The party’s Nico de Jager then also weighed in and responded specifically to Leon, by reminding him that strategic planning sessions are just as important when running a city.

“Come on Tony a caucus strategic planning session is as much a part of politics as running a city. The mayor is afterall also heading a political party in her City and needs to be sure that her caucus is behind her. A strategy that many political leaders should know all about!,” he wrote.

Helen Zille also entered the conversation, encouraging Phalatse to “keep on keeping on.”

“Keep on keeping on Mpho. You have the toughest job in South Africa.  No-one else, ever, has managed a 9-party coalition, keeping their caucus behind them while trying to fix a broken City.  We back you 100%,” Zille wrote.