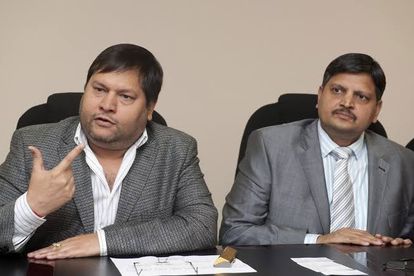 Social media has been abuzz following the arrest of two Gupta brothers. South Africans are now pleading with President Cyril Ramaphosa to allow the brothers to land at the Waterkloof Air Force Base in Pretoria followed by lights brigade ‘legally’ this time.

In April 2013, the controversial Gupta family made headlines with news that hundreds of guests for Vega Gupta’s wedding were flown into the country using a private jet via the Waterkloof Air Force Base in the City of Tshwane, Gauteng. As a military facility, the incident caused distress among the South African public and was duly investigated by then Public Protector Thuli Madonsela.

Koloane was suspended by Dirco in the wake of the Waterkloof debacle in April 2013 amid speculation that he’d become the “fall guy” for President Jacob Zuma, on whose instruction the landing of the Jet Airways plane was allegedly cleared.

However, Koloane was later controversially appointed as South Africa’s new ambassador to the Netherlands.

MZANSI WANTS GUPTAS TO LAND AT PRETORIA’S AIRFORCE BASE

Following the news of the arrest of the Gupta brothers, South Africans have called for them to land at the Waterkloof Air Force Base once more but legally this time around.

“Now all that is needed for the country to heal from State Capture is for the Guptas to be returned El Chapo style in full view of the media with the plane landing at Waterkloof Airforce base,” @Nape_MM twetted.