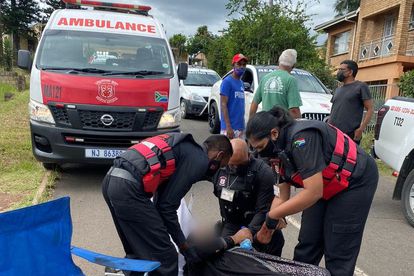 The woman was taken to hospital in a critical condition – Photo: Arrive Alive / Twitter

The woman was taken to hospital in a critical condition – Photo: Arrive Alive / Twitter

An Indian national in her thirties was rushed to a nearby hospital on Tuesday afternoon, after she was targeted by two merciless thugs in Durban. The suspects remain at large, as cops continue to probe the hijacking incident.

It’s believed that the victim suffered a total of EIGHT stab-wounds, and she required emergency intervention at the scene. Information provided by Reaction Unit South Africa revealed the following details:

The victim was accompanied by her younger brother-in-law. It’s understood the pair have been residents of Durban since 2018, opening both food and salon businesses in Verulam. The Indian national, however, now faces a fight to survive:

“Upon arrival, First Responders found a woman with eight stab wounds to her upper body. Paramedics stabilized the woman on scene and rapidly transported her to a hospital in a critical condition. When interviewed on the scene, a 21-year-old male informed Reaction Officers that he and his sister-in-law were from Mumbai, India.”

“When the man and his sister-in-law arrived at a nearby store, they noticed two males waiting near the building and picking cardboards and cans. Minutes later he heard her scream hysterically. He then ran towards the vehicle and found one of the cardboard collectors with a firearm and the second repeatedly stabbing the woman.”