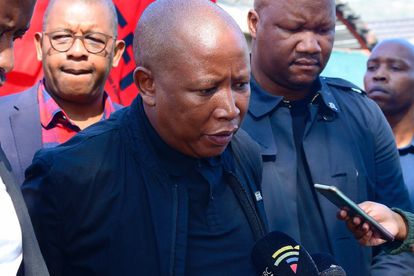 Speaking from the depths of a broken heart on Wednesday, Julius Malema has lamented the horrific killing of Hillary Gardee. The 28-year-old daughter of the EFF’s Head of International Relations, Godrich Gardee, was found murdered near Nelspruit earlier this week. Now, Juju is vowing vengeance against the perpetrators.

Julius Malema vows to take law into his own hands

The EFF confirmed earlier in the week that Hillary Gardee was the victim of gender-based violence. The Red Berets, who are vehement campaigners against GBV, have been left to mourn the tragic loss of one of their own.

Political theories about the killing – with some linked to the EFF’s ‘open borders’ policy’ – have been rife, but an angered Malema moved to strike these rumours down on Wednesday. In his recent address to the media, the 41-year-old said ‘only people with peanuts for brains’ believe in these stories.

[MUST WATCH]: CIC @Julius_S_Malema responding to whether he thinks there’s a link between the EFF open border position and the murder of Hillary Gardee. #RIPHillaryGardee pic.twitter.com/29z2NKvNZT

Instead, Julius Malema and his colleagues are adamant that Hillary Gardee is simply another victim of male-on-female crime. The firebrand politician isn’t afraid to take things into his own hands either, and he warned Police Minister Bheki Cele that he must ‘find the killers before he does’ – or else Mzansi will ‘see the ugly side of the EFF’…

“We want to teach them a lesson, they have took a wrong one this time around. Anyone who touches our children touches us and they don’t want to see the ugly side of the EFF.”

“They invited it and we shall show them that ugly side of the EFF. One thing is for sure, we will find them. They will know who we are when we’ve found them, too. As EFF, we have committed to the Gardee family to find the killers. Bheki Cele must find them before us because we can’t give him any guarantees.”