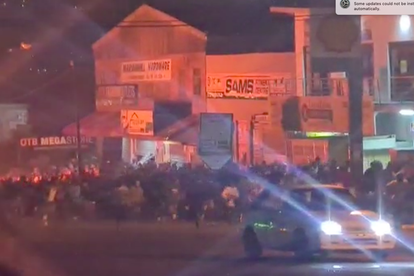 Violent rioters, believed to be supporters of former president Jacob Zuma burned and looted shops and business and blocked roads in widespread riots across Durban on Sunday evening.

Dozens of videos and photographs of the riots were circulated widely on social media as thousands of angry people took to the streets, torching businesses and vehicles.

Watch a video of a mob descending in Marrianhill in Pinetown:

Other videos and photographs depicted rubble burning outside businesses in Umbilo and Tongaat, while others recorded gunshots being fired as looters descended on Knowles Superspar in Pinetown. Looters and rioters also targeted Umlazi Megacity and blocked the N2 near Shell Ultracity outside Umgababa on the South Coast in both directions. A storage facility in Brackenfell was also set alight.

Police fire rubber bullets at a mob in Albert Park in the video below:

Reports of people starting to gather near the Pavilion in Westville and a video of mobs running in the Albert Park area of the CBD were also circulated after the 9pm curfew. Rioters also ran through New Germany, KwaMashu and North Coast Road in Durban North as well as other areas.

“SAPS, together with Metro Police have been deployed to identified volatile areas. They are visible and on high alert to respond to any disruptions, for now in KZN (KwaZulu-Natal) the number of arrested people has risen to 43.”

Earlier on Sunday police said in a statement that 62 people had been arrested during the violent protests in KZN and Gauteng at the weekend.

“The SAPS in Gauteng and KwaZulu-Natal, working closely with their respective local Metro Police Departments, have heightened visibility and remain on high alert in response to incidents of opportunistic criminality and violent protests in the two provinces over the weekend,” the police said.

“Gauteng Police working closely with the JMPD last night responded swiftly to sporadic incidents of looting of businesses and barricading of roads in Jeppe and Alexandra, and arrested 25 suspects.”

In the Jeppe policing precinct, police dispersed a group of about 300 people who had barricaded the M2 freeway. It is alleged that one group then headed to the Jeppestown where they looted a number of businesses. Seven suspects were arrested, four of whom were found inside one of the stores, while three were arrested for public violence and for being in possession of suspected stolen property.

In Alexandra, police arrested 18 suspects – 16 of them for public violence also linked to the shooting of a police officer who was taken to hospital for urgent medical attention. Two other police officers sustained minor injuries.