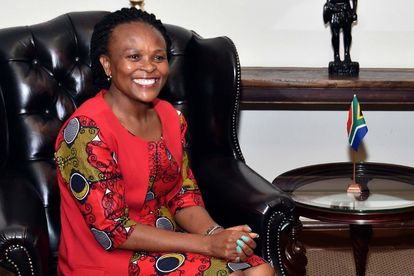 Embattled Public Protector, Advocate Busisiwe Mkhwebane is fighting tooth and nail to return to work – she now intends appealing a judgement by the High Court in the Western Cape which dismissed her application to be allowed back at her office immediately.

Mkhwebane was suspended by President Cyril Ramaphosa in June, pending the conclusion of the Parliamentary inquiry into her fitness to hold office. She turned to the courts seeking her immediate reinstatement as soon as her suspension by Ramaphosa was declared null and void by the same court.

Busisiwe Mkhwebane has told SABC News she now wants the High Court to grant her leave to appeal to the Supreme Court of Appeal (SCA). Mkhwebane says she is ready to finish her term in office, which ends in 2023.

“We are going back to the Western Cape High Court to apply for leave to appeal to the Supreme Court of Appeal, but if the judgment or the decision is not issued before the 24th of November, we are hopeful that the same matter will be ventilated at the Constitutional Court. And again let that sink to South Africans, I am not a person who would just sit at home, that’s not in my nature”

The Democratic Alliance (DA) subsequently launched an application for leave to appeal the High Court’s decision – the bid immediately suspended the ruling. Ramaphosa is also challenging the move to nullify his suspension of Mkhwebane.