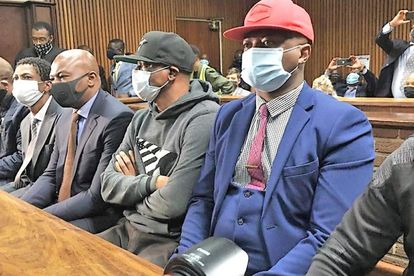 Seven people accused of corruption in the Free State appeared at the Bloemfontein Magistrate’s Court on Friday. Photo: Twitter/Freestater

Seven people accused of corruption in the Free State appeared at the Bloemfontein Magistrate’s Court on Friday. Photo: Twitter/Freestater

The case involving the R255 million asbestos saga has been postponed to 11 August 2021 and has also been moved to the Bloemfontein High Court, Free State. African National Congress (ANC) secretary general Ace Magashule made an appearance in the Bloemfontein Magistrate’s Court on Friday, 19 February 2021, alongside several of the co-accused.

Other suspects who appeared include controversial businessmen Edwin Sodi and Abel Manyeki, former Mangaung mayor Olly Mlameli, the Director for Supply Chain Management at the Human Settlements Department Mahlomola John Matlakala and the same department’s former Director-General Thabane Wiseman Zulu. Nthimotse Mokhesi, the department’s former HOD however could not appear due to ill-health.

“They are all charged with more than 70 counts of fraud, theft, attempted theft, corruption in contravention of the Prevention and Combating of Corrupt Activities Act, money laundering and contravention of various Asbestos Regulations, promulgated in terms of the Occupational Health and Safety Act 85 of 1993,” the NPA said in a statement.

Three co-accused in asbestos saga granted bail – who are they?

The development comes just moments after the latest co-accused in the matter were each released on R50 000 bail. The three suspects were arrested by the Directorate for Priority Crime Investigation (DPCI), also known as the Hawks, on Thursday.

“Three senior government officials were arrested by the Hawks’ serious corruption investigation team in the early hours of today [Thursday] in Bloemfontein in relation to the asbestos investigation facing charges of corruption,” said Hawks national spokesperson Colonel Katlego Mogale at the time.

“The allegations relate to a contract that was awarded through a procurement process that was done in a fraudulent and corrupt manner. The contract was meant to identify and remove asbestos roofs in the Free State province. During that period the department incurred unauthorised, irregular or fruitless and wasteful expenditure worth over R255 million”