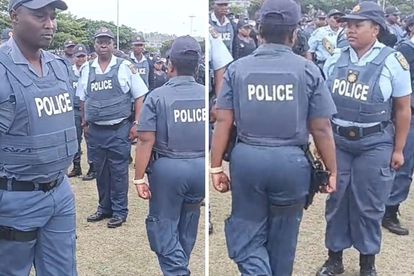 South African tweeps are amused at a clip of confused police members during a parade at the Moses Mabhida Stadium.
Image via Twitter
@ZANewsFlash

South African tweeps are amused at a clip of confused police members during a parade at the Moses Mabhida Stadium.
Image via Twitter
@ZANewsFlash

South Africans on social media are having a good laugh at a clip of a dismal police parade, taken at the Moses Mabhida Stadium in Durban.

Not for the first time, a drill involving members of the South African Police Service (SAPS), has gone viral on social media.

And like before, it’s clear the members – who signed up to protect the country – lack a basic understanding of their duties.

The clip of the police parade was taken outside the Moses Mabhida Stadium, which will be the venue for Zulu King MisuZulu kaZwelithini’s certificate handover ceremony on Saturday 29 October.

With rumours of terrorist attacks being planned over the weekend, Police Minister Bheki Cele and the National Commissioner of the SAPS General Fannie Masemola addressed the group of personnel on their safety operational plan put in place to safeguard the event.

But the laughable police parade – consisting of a basic drill command – ended up overshadowing the seriousness of the situation.

In the clip, two female officers are seen turning in the opposite direction to the rest of the group. Clearly embarrassed, the females hang their heads in shame as the rest of the members giggle at the faux pax.

And if that wasn’t bad enough, in the same clip, another female police member is seen pulling out her cell phone to seemingly check her updates.

I can barely excuse the constables that aren't in sync, but checking your phone during a drill? Where is the discipline? pic.twitter.com/Ev9ZPvSrfL

“You are not hiding there, I can see you”, voice booms over the loudspeaker.

It’s not the first police have embarrassed the country. Remember this cringe-worthy clip?

😄😄 they learnt from the best pic.twitter.com/1Qh2vxN7RS

MABENA, IS THAT YOU?

But whilst the clip of the confused cops is clearly funny, tweeps expressed their hopelessness in the police service.

@van_lexi: “This can’t be real. Aren’t these background actors for a movie?”

@ThabisoTema: “Those terrorists won’t know what hit them. They’ve never seen this drill!”

A disgrace of note pic.twitter.com/9G2CX2svso