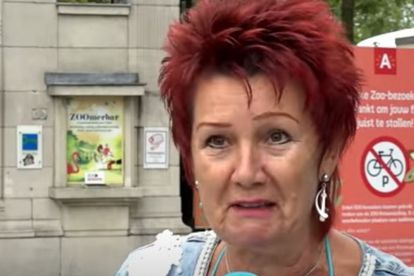 Adie Timmermans has told local media that she has a strong connection to a male chimp named Chita, whom she has visited at the zoo every week for the last four years.

‘I love that animal and he loves me’

And the red-haired woman claims their bond is incredibly strong.

“I love that animal and he loves me. We’re having an affair, I’ll just say”, she told news outlet ATV.

Also read: Lebo M on ex-wife’s affair: ‘Nandi cheated on me with another woman’

According to Adie, the Antwerp Zoo in Belgium has “banned” her from visiting the chimp — a decision she is heartbroken over.

“I haven’t got anything else. Why do they want to take that away?…Other dozens of visitors are allowed to make contact. Then why not me?” she emotionally tells the television crew.

Footage from ATV shows Adie and Chita  “blowing kisses” at each other through a glass window.

However, representations for the zoo have denied the woman’s claims and have spoken out to set the record straight, claiming that they have asked her “change her behaviour” towards the animal instead.

ZOO: WE WANT CHITA TO BE A CHIMPANZEE

Chita is a 38-year-old chimp that was raised by humans and subsequently given to the zoo, where he now lives alongside other wild animals.

And zoo curator Sarah Lafaut claims they are concerned the chimp is not socialisng with the rest of his pack, and relying on human interaction instead.

“When Chita is constantly surrounded by visitors, the other monkeys ignore him and don’t consider him part of the group…He then sits on his own outside of visiting hours,” said Sarah.

And she claim the woman’s visits are proving detrimental to the animal.

“She is asked not to make contact with chimpanzee Chita when she comes to visit. Adie goes to the zoo every week and Chita always cheerfully walks over, after which the two play together at the window for a while, but according to the zoo that is not good for the monkey’s well-being.

The zoo believes it is making the right choice to “end” the woman’s “relationship” with the chimp.

“An animal that is too focused on people is less respected by its peers. We want Chita to be a chimpanzee as much as possible”.