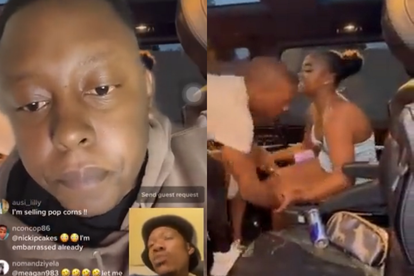 The driver of the V-Class Mercedes Benz shares what happened. Images via Twitter: @adovovBerryRoux

The driver of the V-Class Mercedes Benz shares what happened. Images via Twitter: @adovovBerryRoux

On Monday evening this week #VClass was trending on South African Twitter. This comes after a man was seen yelling at a woman to get out of his Mercedes Benz V-Class. After the video surfaced many speculations surfaced about what was happening and now the man in the video has spoken out to clear the air.

V-Class goes viral after guy manhandles woman in his car

All of South Africa is talking about a video that has been circulating online. In the clip, the man can be seen yelling at a young woman who has been identified as Nthabiseng “Princess” Mtetwa, to get out of his car. In the clip, she seemingly refuses to get out and rather changes seats.

The man then decides to get inside the car and physically pull her out. Thus resulting in her apologising profusely while begging him to stop.

The video then stops abruptly without any explanation as to what happened to the young woman and her friend who seemingly did not want to get involved.

Now the driver speaks out

The driver of the V-class has since shared his side of the story. According to him, he and his wife were leaving a Joburg club when they spotted Nthabiseng and her friend who appeared to be stranded.

He also explains how he then gave them a ride when Nthabiseng started becoming “disrespectful”.

Speaking in the clip, he shares how she took off her shoes, put them on his seat, and started drinking despite his requests for her to stop. This is when he became angry and told her to get out.

Despite the fact that he shared his side of the story, netizens still believe there is more to it. Many have also accused him of lying about some of the stuff he was claiming happened in the clip.