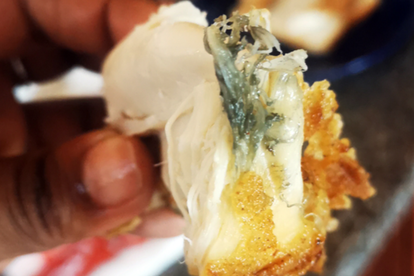 Another customer has been disgusted by a KFC meal. Image: Supplied

Another customer has been disgusted by a KFC meal. Image: Supplied

A young Cape Town student is fuming. This after she stopped by her local KFC to buy a nice hot meal after her long and difficult exam. Unfortunately for her, the meal turned out to be everything but nice. After taking a big bite, she discovered that the piece of meat had mould on it.

Imagine stopping by your favourite fast-food restaurant to fill your belly after an exam and then biting into a mouldy piece of meat? Andrea Meyer does not need to imagine.

Speaking to the Daily Voice, Andrea shares how she decided to get some food at the Stellenbosch KFC after writing an exam. She ordered an R65 special and some Zinger wings and was obviously excited to tuck in when she got home.

“I went to the campus to write my final exam and on the way home, asked the e-hailing driver to go to the drive-through so I could get chicken and dunked wings,” she tells the publication.

After sharing the meal for herself and her roommate, she took a big bite out of her chicken but much to her dismay, noticed it was covered in green mould.

“I got home and dished for my roommate and then discovered the mould and I was already eating it.”

No response, no refund?

She then took a photo of the meat which she emailed to customer care while demanding a refund. Unfortunately for her, she never received a response from the restaurant.

Daily Voice reports that they called the Stellenbosch KFC branch and was told that Andrea had to bring the meat back.

“Tell her to return it and then we can investigate the problem.

“People must either call us or come to the branch instead of sending an email.”