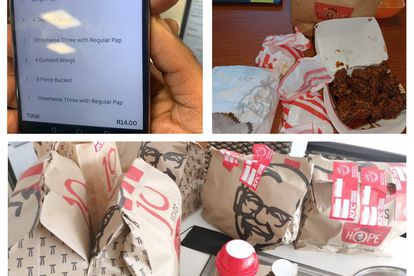 South African Uber Eats users had a field day after discovering a glitch in the system, which saw KFC unknowingly offering meals for free!

The app recorded a technical snag resulting in all meals from the fast-food restaurant being priced at R0!

One tweep shared: “R0 on Uber Eats for KFC delivery fee is R6 I’m tipping R50. Enjoy. My sister put me on, so putting you on”.

Another tweep revealed how their office of co-workers ordered up a storm on the R0 meals. They tweeted: “There was an error on KFC on Uber Eats and everything was R0… the girls in the office went ham.”

Another bragged about paying a R14 Uber Eats delivery fee for a whopping order, which included  three 21-piece buckets, 10 dunked wings, three packs of 4 zinger wings, and another 9-piece bucket

Others also shared their unbelievable free meals courtesy of Uber Eats and KFC.

Had some nice breakfast 😭😭😭 pic.twitter.com/98RvZUYUAT

If you’re hoping to cash in on the free food, we’re sorry to tell you that Uber Eats and KFC have since rectified the error.

Uber Eats was alerted to the error by customers on social media and temporarily pulled the restaurant off their service.

KFC is now back on Uber Eats – and all meals are back to regular pricing.

“We apologise for any inconvenience caused,” Uber Eats Sub-Saharan Head of Operations Charles Mhango said in a statement.

On Twitter, KFC laughed off jokes about the food freebie by fans who begged them to repeat their “offer”.