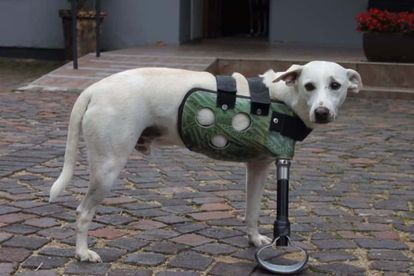 The last 12 months have been short of good news stories. Between the pandemic and the struggles that we’ve had to endure as a planet as we do our best to protect ourselves and others, there hasn’t really been much to smile about. Enter Eddie.

Eddie is a dog that had to overcome a terrible start to life but can hopefully be a reminder to us that there’s still a lot of good people in the world and that even tragic stories can have happy endings.

The Citizen first reported about little Eddie a dog who was found by train tracks. Eddie was emaciated and his right front and left hind leg were crushed. It’s not known how they were crushed.

A new limb for Eddie

Eddie’s life was saved after successful surgery which resulted in the two crushed limbs being amputated.

He joined the family of veterinarians Lizahn and Sanlie van den Brink he’s come to learn how to navigate life on two paws. Unfortunately, as you’d expect life on two limbs meant that Eddie would tire quickly as he tried to live his best doggy life.

“Eddie was so excited to see his orthotists at Animal Care Division again. It’s going to take some getting used to this strange new thing strapped to his body, but he can stand on his own already which is a huge step forward”.

However, the lucky pooch and his parents started fundraising last year to try and get Eddie fitted for a prosthetic front leg that would allow him to take some of the weight off is good front leg which was carrying most of his weight.

Having raised the money needed brave little Eddie was finally fitted for his prosthetic leg this month. The leg was fitted by Animal Care Division.

As you’d expect it’ll be a while before Eddie gets the hang of his new limb but once he’s figured out how to around with his third leg he’ll finally be able to fully enjoy his beloved daily walks and give any birds he might come across a proper run for their money.

Avontuur Vet ended up raising nearly double their target of R15 000 to R20 000 for Eddie’s prosthetic leg and the vets have promised to use the extra money raised to cover the costs of welfare cases at their Veterinary practice.

This will be great news for other animals like Eddie who require treatment but would not normally be able to get it.

Now read: Tune in for free webinar about youth entrepreneurship