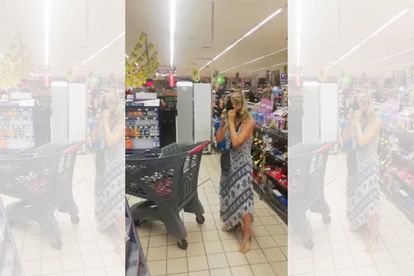 Shoppers at an unnamed local Pick n Pay supermarket were surprised when a woman seemingly used her underwear as a mask after she claimed she did not have one.

Woman uses a thong as a mask

In the video, which has since gone viral on social media, a masked security guard can be seen asking the woman to put a mask on. She replies: “I don’t have one.”

After security asks her again saying she will be escorted out if she does not wear a mask, the woman is seen reaching under her dress, pulling down her thong and putting it on as a mask.

“What’s going on?” someone can be heard asking in the video. It seems to be the same woman who went viral earlier this week for confronting staff at the same store and telling them to remove their face-coverings.

This time however, she is recorded saying that she believes the “bacteria on her [the other woman’s] knickers is less than on the mask”.

“Personally, I find it acceptable,” she says further. “It is a mask.”

She proceeds to congratulate the woman who is wearing the thong as a mask saying “well done”.

“Stay at home and do online shopping if you don’t like the idea of wearing a mask,” one Facebook user commented on the video that already has over 900 comments. “So embarrassing!”

Another user said it makes her sick.

“This makes me sick. She is aware of the law world wide. We sit with a, serious virus and a G-string will save her. Come on grow up. What must your family think. [sic]”

Others believe that the whole thing is fake:

“This is not real. If you look at her taking it off, she never lifted her right leg. This was just a joke that she intentionally did.”

Not wearing a face mask in South Africa is a criminal offence. In December 2020, President Cyril Ramaphosa stressed that not wearing a mask in public is inconsiderate and will not be tolerated.

In one of his speeches, the president said: “We now know that the simplest and most effective way to reduce transmission of the coronavirus is to wear a cloth mask that covers the nose and mouth whenever in public. Until now the owners and managers of shops and public buildings, employers and operators of public transport have had a legal responsibility to ensure that everyone entering their premises or vehicle is wearing a mask.”

He went on to announce it is compulsory for every person to wear a mask in a public space. And if you fail to comply, you will be committing a criminal offence.

“A person who does not wear a mask could be arrested and prosecuted. On conviction, they will be liable to a fine or to imprisonment for a period not exceeding six months or to both a fine and imprisonment,” said Ramaphosa.