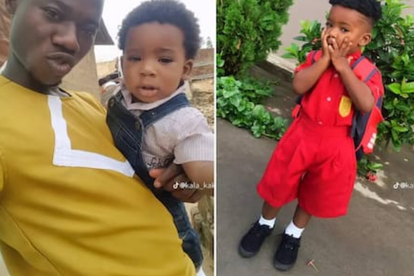 This young man says he has been raising this boy since he was only a baby abandoned in the street. Images via TikTok: @kala_kakapentoa

This young man says he has been raising this boy since he was only a baby abandoned in the street. Images via TikTok: @kala_kakapentoa

A young man has received high praises online after sharing his touching journey into rescuing a baby from the streets and then raising the child as his own. Heading online, the man shared snaps of the little one who is now four years old and already heading to school.

Many social media users have lauded the man for not only rescuing the child but for taking such wonderful care of him and giving him a new lease on life.

Young man praised after saving baby from streets and raising him

Not many people are willing to adopt a homeless child and love that child like their own. This is why one young man has gone viral on TikTok after sharing how he had found a baby in the streets and then took the child home to raise him like his own.

Taking to the app earlier this week, the man with the handle,@kala_kakapentoa shared that he found the little one a few years ago and is now sending him to school.

In the first photo, the boy is only a baby and in the next, he is all dressed up and ready for school in his school uniform.

According to Kakapentoa, raising the little one has been a tough job so far but he had the help of his mother who supported his decision to take the child in.

ALSO READ: Homeless graduate who lost it all after mom died gets help from ex lecturer

The post received thousands of reactions from TikTokers who loved that the young man did such a wonderful thing for the child. Many of them shared positive messages with him in the comment section.

“I too have a son that’s not mine since he had no one to take care of him so I took him as my own.. this child will be a blessing to you trust me.”