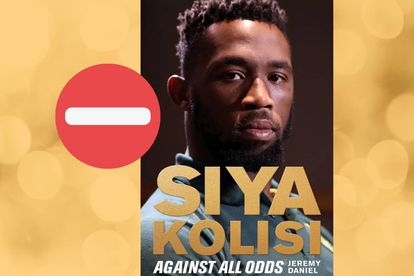 Rachel Kolisi, wife of Springbok rugby captain Siya Kolisi, is appealing for sales to stop of an unauthorised biography on her husband.

Published by Jonathan Ball Publishers, Siya Kolisi: Against All Odds by Jeremy Daniel first came out in August 2019. The book details how Kolisi became the first black South African “from the impoverished streets of Zwide” to captain the national rugby team.

It recently went into reprint, sparking off Rachel Kolisi’s post on Instagram on Thursday. In her post, Rachel makes an emotive call, saying publishing the book is “white men benefiting off the back of a black men”.

Rachel Kolisi used the hashtag #SaveSiyasStory and made a plea not to buy, sell or market the book.

“There was a book written about Siya’s life without his consent,” she wrote. “Siya has not benefited from this unauthorised book in ANY WAY.

“It was released during the World Cup and we HAD a[n] agent at the time who advised us not to take it further, and legally we had no foot to stand on.”

Rachel says Siya did not consent to the use of his name and information in Siya Kolisi: Against All Odds.

In South Africa, it is not illegal for authors to write and publish biographies about public figures without their knowledge or consent.

Rachel’s caption goes on to explain how some of the Springbok captain’s struggles are public knowledge while others are private.

“Siya has gone through so many struggles some you might know about and some you have no idea. But the story is HIS to tell.”

Rachel said she “thought the book had died out with the announcement of Siya’s ACTUAL book told by him on the way” and so she was shocked by the news of an updated version.

She calls on “book stores and online sites not to support the selling of these books” and to remove all marketing material.

In South Africa, the Copyright Act of 1978 protects certain categories of works if they meet certain conditions.

Unauthorised biographies are common in the book publishing world although if Siya Kolisi has registered his name as a copyright, there may issues to consider.

By virtue of being in the public eye as Springbok captain Kolisi arguably gives up, to a degree, his right to protection under South Africa’s privacy laws. Nonetheless, this does not mean he wants his private information to go public.

This is one of the points Rachel makes in her Instagram post. She believes the law should protect him on this basis.

The story of the national team captain is certainly in the public interest and the issue is who gets to tell the story.

Who wrote the Siya Kolisi book?

Johnathan Ball Publishers can invoke its right to freedom of expression, enshrined in Section 16 of the country’s Constitution.

In South Africa, everyone may express themselves freely so long as they do not propagate war, incite violence or advocate hate.

Daniel is an author, screenwriter and musician who also was the head writer for Takalani Sesame.