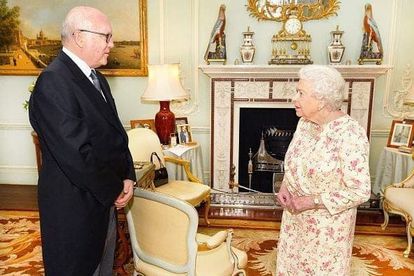 LONDON, ENGLAND – MAY 30: Queen Elizabeth II talks with the Honorable George Brandis, the Australian High Commissioner to the United Kingdom, during a private audience at Buckingham Palace on May 30, 2018 in London, England. (Photo by John Stillwell – WPA Pool / Getty Images)

LONDON, ENGLAND – MAY 30: Queen Elizabeth II talks with the Honorable George Brandis, the Australian High Commissioner to the United Kingdom, during a private audience at Buckingham Palace on May 30, 2018 in London, England. (Photo by John Stillwell – WPA Pool / Getty Images)

It looks like some internet ‘investigators’ spotted a new and never-seen-before photo of Prince Harry and Meghan Markle in the Queen’s home.

According to Hello Magazine, a picture taken on Wednesday shows Queen Elizabeth II meeting with George Brandis, the Australian high commissioner to the UK. It didn’t take long before an eagle-eyed reporter from Hello Magazine spotted something interesting in the background.

Of course, the internet went nuts when this was uncovered.

Upon inspection, the photo features Prince Harry and his wife, Meghan Markle in an embrace. It appears that Meghan is wearing a pale blue dress and Harry a suit. While it is unclear when the photo was taken, some speculate that it is a part of the Duke and Duchess of Sussex’s engagement photos taken by Alexi Lubomirski that were never released to the public.

Along with the new photo of Prince Harry and Meghan, other ‘investigators’ also spotted a never-before-seen portrait of the Queen’s granddaughter, Zara, on her wedding day to Mike Tindall.

If you take a closer look, the secret photo of Prince Harry and Meghan Markle are in plain sight:

Earlier last week, Meghan Markle’s very own Coat of Arms was released to the public.

A Coat of Arms has been created for The Duchess of Sussex: https://t.co/mJb3mqZfaZ pic.twitter.com/0EgbiS29Rb

The statement by the royal family reads:

“Her Royal Highness worked closely with the College of Arms throughout the design process to create a Coat of Arms that was both personal and representative.

“The blue background of the shield represents the Pacific Ocean off the California coast, while the two golden rays across the shield are symbolic of the sunshine of The Duchess’s home state. The three quills represent communication and the power of words.

“Beneath the shield on the grass sits a collection of golden poppies, California’s state flower, and wintersweet, which grows at Kensington Palace.

“A Coronet has also been assigned to The Duchess of Sussex. It is the Coronet laid down by a Royal Warrant of 1917 for the sons and daughters of the Heir Apparent. It is composed of two crosses patée, four fleurs-de-lys and two strawberry leaves.

“The arms of a married woman are shown with those of her husband and the technical term is that they are impaled, meaning placed side by side in the same shield.”

Looks like Meghan has been welcomed with open arms into the royal family!