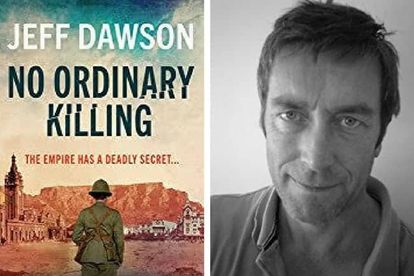 A few years ago English author Jeff Dawson was living on a street called Ladysmith Road. It joined another one called Kimberley, both thoroughfares of solid, red-brick terracing.

“Show me any British suburb, built around 1900, and I will give you roads called Ladysmith and Kimberley, Mafeking too,” he says. “All named after towns besieged, then jubilantly relieved, during the Boer War.”

Intriguingly, it sowed the seed for a book set around that time in South Africa. He’d already been to Cape Town, Johannesburg and Namibia several times researching another book and he quickly got writing. The result is No Ordinary Killing, a cracking thriller crime novel.

“No Ordinary Killing is not about the Boer War but is a murder mystery, a thriller, set against its backdrop,” says Dawson. “Away from the military action, Cape Town then was a heaving, exotic port, with thousands of soldiers passing through, either on their way up to the Front, or on leave from it.”

Behind the genteel veneer, it was also a city of bars, bordellos, conmen and a crime wave, with a lid clanging on a simmering pot of ethnic tension.

“My story is set in 1899, as the Boer War rages. Captain Ingo Finch of the Royal Army Medical Corps works to piece together casualties at the front. Later, recovering in Cape Town, he is woken by local police. A British officer has been murdered, killed under seemingly strange circumstances, his body dumped on the veranda of his guesthouse.

“An RAMC signature is required for the post-mortem. The officer’s death falls between the jurisdictions of the over-burdened Cape Constabulary and the Military Foot Police.”

Soon Finch finds he has stumbled on a terrifying secret, one that will shake the Empire to its core…

Dawson is a journalist and author and is a long-standing contributor to The Sunday Times Culture section. He is also a former US Editor of Empire magazine and has written three non-fiction books — Tarantino/Quentin Tarantino: The Cinema of Cool, Back Home: England And The 1970 World Cup, and Dead Reckoning: The Dunedin Star Disaster, nominated for the Mountbatten Maritime Prize.

He plans No Ordinary Killing to be the first in a series of three historical crime thrillers where characters, references and flashbacks to the Boer War recur throughout.

No Ordinary Killing by Jeff Dawson is published this month by publishers Canelo and is available Amazon/Kindle, Google Play, Apps iBooks and Kobo.