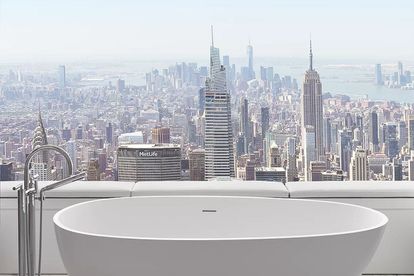 The owner of a 96th-floor penthouse atop Manhattan’s 432 Park Avenue is seeking a hefty return on the investment, by listing it for sale at $169 million (R2.5 billion) – almost double the original purchase price.

Owning a penthouse in New York

Now, the 767-square-meter apartment is being offered along with all its furniture and artwork, according to StreetEasy.

The listing, by broker Ryan Serhant, calls the penthouse “a trophy unlike any other in the world,” with a private elevator landing, herringbone white oak floors and designer furniture from Fendi, Bentley and Hermes.

The 426-meter skyscraper – with amenities including climate-controlled wine cellars, a library, private restaurant and screening room – was once the tallest residential tower in the Western Hemisphere. The building has historically offered discounts to its sky-high prices: Buyers who completed purchases in 2016 got reductions averaging 10%, according to an analysis by Miller Samuel.

“Unique features include a living and dining great room, 240 linear feet of glass with 360-degree views over Manhattan, and soaring 12.5 ft ceilings,” states its official listing. “This home has the perfect layout, with six bedrooms, seven full bathrooms, two powder rooms, and a collection of high-end fixtures.”

According to Bloomberg, the unit overlooking Central Park was purchased for $87.7 million in 2016. “The seller of the penthouse is under the assumption that the market has doubled since September of 2016,” Miller said further. “The list price assumption seems inconsistent with market trends.”

But, Serhant, head of a brokerage that bears his name, said more than half a dozen would-be buyers have toured the penthouse since its listing this week – from locals to tech insiders to crypto players.

“The market moves where the market needs to move,” Serhant said. “There is a flight to hard assets today,” as there was during the financial crisis. “There are a lot of people looking for places to put their money,” he said, “in cash, cars, cryptocurrency and high-end real estate.”

WATCH | Pitso on Al Ahly exit: I needed this rest with my family! [Video]