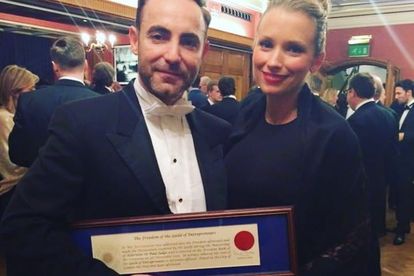 Avi Lasarow, founder of the British life sciences company DNAFit and an Honorary Consul for South Africa in the UK, recently won Innovation of the Year in the prestigious 2015 Lloyds Bank National Business Awards for his genetic test that helps people boost their athletic performance and lose weight.

The Guild of Entrepreneurs is made up of men and women who have invested their own money and time in setting up and running successful businesses. The Guild and its members:

Founding Guild of Entrepreneurs members include Cobra Beer entrepreneur Lord Karan Bilimoria CBE DL, the entrepreneurial TV chef and multiple restaurant-owning Cyrus Todiwala OBE DL, the former banker Rupa Ganatra who has launched several of her own businesses and the former professional athlete Ben Camara who co-owns several City fitness studios as well as other businessmen and women who own and run online, property, service, fashion and hospitality businesses.

DNAFit uses a mouth swab to test 45 gene variants scientifically-linked to a body’s capacity to respond to training and nutrition. It then provides detailed reports on how to alter your diet and exercise to meet your goals. Tests can be bought online at dnafit.com from £99 and will next week launch nationwide in High Street sports nutrition store GNC.

DNAFit founder Avi Lasarow added: “I am absolutely honoured to have been inducted into the Guild of Entrepreneurs. Not only am I thrilled to accept this invitation as DNAFit’s founder, but also as an Honorary Consul for South Africa promoting greater trade links with the UK.

“DNAFit has shown what can be achieved when people from our two great countries work together to develop an innovative product and company. I hope to use my membership to encourage greater co-operation and innovation between South Africa and the UK. Entrepreneurs are the lifeblood that fuel successful economy and I hope I can encourage others to turn their great business ideas into successful and dynamic companies.”

City of London-based DNAFit, which has collaborated with Google-backed genomic company 23andme to offer the diet and exercise service to their one million customers, has already helped elite athletes and Premier League footballers improve their performance.

DNAFit is also being used in a pilot project in Essex to help obese people shed the pounds after studies revealed those who go on a diet matched to their genes can lose up to 33% more weight than those on unmatched diets.

The DNAFit test has had glowing reviews in titles as wide ranging as the Financial Times, Men’s Fitness and Vogue as well as being used by Gabby Logan, who tested herself for the BBC 2 sports documentary ‘The Olympic Journey: Born Winners.’