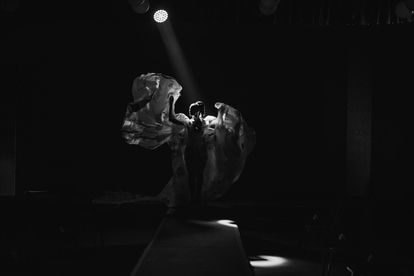 The National Costume competition at Miss Universe is always a jaw-dropping event and this year’s pageant is no different.

South African entrant Natasha Joubert unveiled her stunning outfit, with drawings from the children of South Africa digitally imprinted onto the beautiful creation.

The garment’s flowing cape added colour to a largely white outfit with a cinched waist and our Miss Universe contestant looked a picture representing the rainbow nation.

The Miss Universe pageant takes place in Florida, USA next month with the National Costume Competition taking place just before the pageant finale which will go out on 17 May.

The virtual event to unveil the dress streamed live and doubled as a fundraiser aimed at empowering local designers who were asked to submit their creations for consideration ahead of the big reveal.

“We were delighted to receive more than 90 entries. The talent is extraordinary and it’s going to be an impressive fashion show. I really urge everyone to tune in and watch it. The fashion industry has been one of the hardest hit sectors due to the global pandemic and some of the designers’ stories really broke my heart. They need our support now more than ever and for some, being part of this initiative, may just change their lives.”

The virtual event also showcased the work of up and coming designers, giving them a platform to showcase their work after the industry was hit hard by the pandemic.

Our Miss Universe entrant hopes to follow in the footsteps of reigning queen Zozibini Tunzi and past winner Demi-Leigh Nel-Peters and keep the crown in South Africa.

“I have been looking forward to this event from the moment of my crowning and will carry the Miss Universe South Africa title with pride. I know that I have big shoes to fill following in the footsteps of both Zozi and Demi-Leigh Nel-Peters,” she said at the launch

Miss South Africa runner-up Natasha Joubert has been tipped to be among the frontrunners for the crown of Miss Universe in what would be a history-making effort. We will bring you details of the pageant and the National Costume competition as they become available, in the meantime, you can soak up the beauty and poise of our representative.